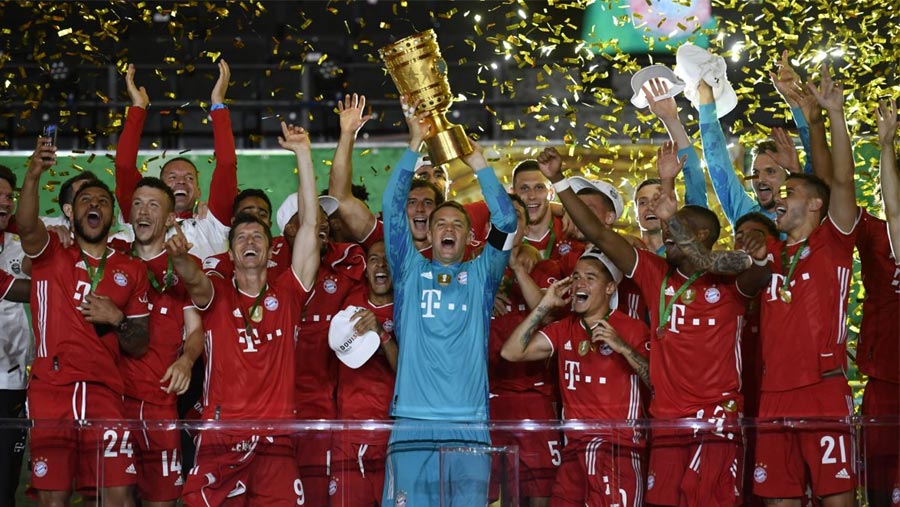 David Alaba's free-kick put them ahead and Serge Gnabry added a second, before Lewandowski's long-range shot was fumbled in by Lukas Hradecky.

Kai Havertz scored a penalty with the last kick for Leverkusen.

Bayern Munich have set a new club record of 26 games unbeaten, only drawing once in that run since December. Their run of 17 straight wins is also a Bayern record.

They were deserved winners at the empty Olympic Stadium in Berlin. Leverkusen had them on the ropes for about 20 minutes after making it 3-1, but Bayern saw it out.

Lewandowski's two goals – which took the Poland international to 51 in 44 games this season for Bayern – were both brilliant.

For the first, he controlled a long Manuel Neuer kick before shooting from at least 30 yards, with the goalkeeper spilling his shot over the line. His second, which ended Leverkusen's hopes, was a wonderful chip over Hradecky.

Leverkusen have lost a Champions League final, three German Cup finals and finished Bundesliga runners-up five times since winning their only two major trophies – the UEFA Cup in 1988 and the German Cup in 1993.

Neither side's season is finished yet. Bayern Munich, chasing a treble, face Chelsea in the Champions League last 16 next month, after winning the first leg 3-0.