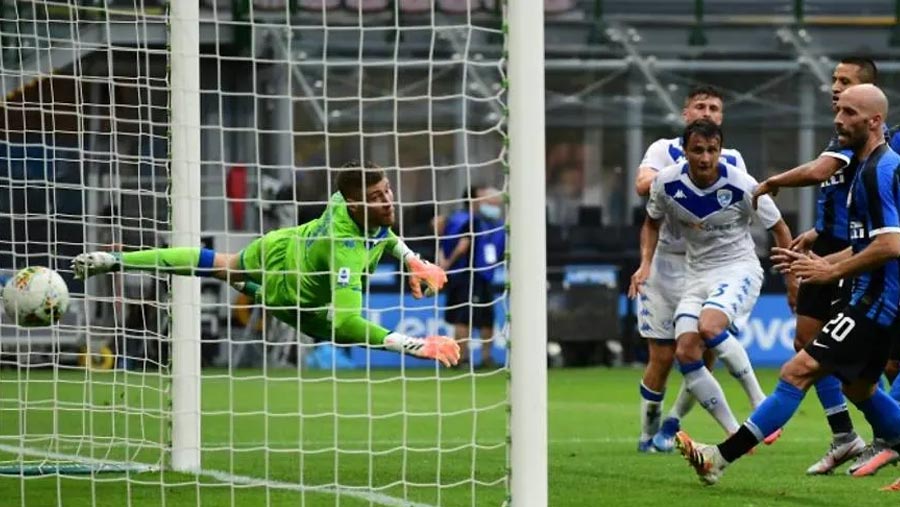 Alexis Sanchez scored a penalty and set up two goals as Inter Milan thrashed relegation candidates Brescia 6-0 in Serie A on Wednesday, while city rivals AC Milan snatched a last-gasp draw away to lowly SPAL.

Sanchez teed up Ashley Young to volley Inter ahead at San Siro after just five minutes and the Chile forward dispatched a spot-kick to double the lead following a foul on Victor Moses.

Danilo D’Ambrosio powered in a third just before half-time from a looping cross by Young, with Roberto Gagliardini rising to head home a Sanchez free-kick as Inter grabbed a fourth on 53 minutes.

Christian Eriksen bagged his first Serie A goal since his January move from Tottenham, forcing in from point-blank range after an excellent Jesse Joronen save denied Romelu Lukaku.

Antonio Candreva completed the romp two minutes from time with a crisp low drive into the corner as Inter clawed back to within eight points of leaders Juventus with nine games still to play.

“We kept our foot on the gas and the fact that we didn’t concede is a big positive,” Inter coach Antonio Conte told broadcaster DAZN.

Sanchez, who made just his fourth league start this term, had his loan deal from Manchester United extended earlier in the day until the end of the Italian season.

“We brought him here for his qualities. Unfortunately we lost him as an option for a long time,” said Conte.

“He’s now starting to find his feet, even if he’s still not the Sanchez I was such a big fan of in England. What I can say however, is that he’s on the right track, he put in a great performance today.”

Brescia, who were again without Mario Balotelli due to an ongoing contract dispute, dropped to the foot of the table. They remain eight points from safety and are winless in 14 games.