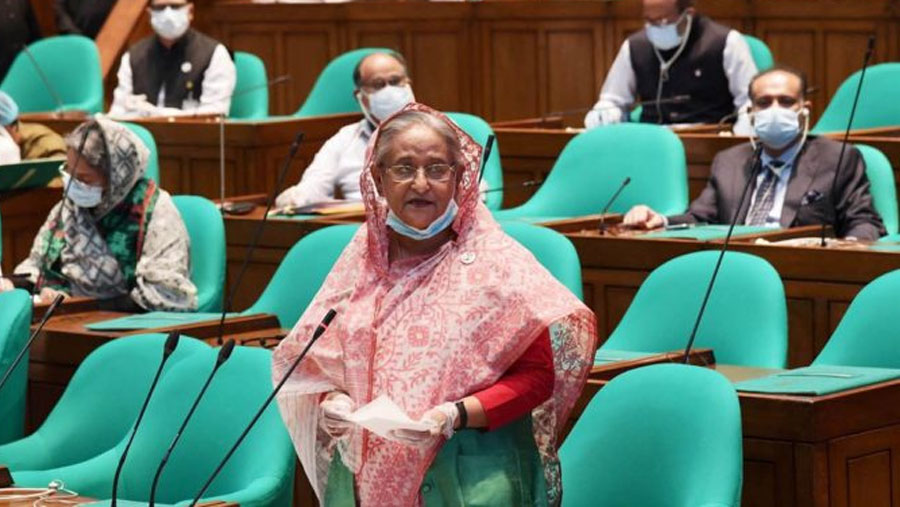 Prime Minister and Leader of the House Sheikh Hasina on Tuesday (Jun 23) said Bangladesh Awami League was committed to the Father of the Nation that the party would always work for the welfare of the people.

“It is our commitment to Father of the Nation Bangabandhu Sheikh Mujibur Rahman that we would always work for the welfare of the people,” she said while joining an unscheduled discussion in parliament marking the 71st founding anniversary of the Awami League, local media reported.

Sheikh Hasina, also the president of Awami League, simultaneously said, “On this day (the day of forming Awami League), we are taking pledge that we would materialize the dream of the Father of the Nation by making the country a “Sonar Bangla” free from poverty and hunger.”

The premier said Bangabandhu is no more within the people of country physically but he is in the mind of all Bangalis as his (Bangabandhu’s) desire to reach Bangladesh in a dignified position in the world will be fulfilled.

“We will have to work for fulfilling the aspiration of the Father of the Nation,” she vowed.

Recalling the contribution and sacrifices of the Awami League and its leaders for the nation, she said that the Awami League has been working and struggling for the welfare of the people since its formation.

The premier said that the day was very important for them as the sun of independence, which was set off through the defeat of the Siraj-ud-Daulah at Palashi Mango Orchard, once again rose by the formation of the Awami League (on Jun 23 in 1949 at “Rose Garden” on K M Das Lane in Dhaka) as the country’s independence had been achieved under the leadership of the party.

In this context, she said the first independent government was formed on Apr 10 in 1971 with making the Father of the Nation as its maiden President, Syed Nazrul Islam as first Vice-President and Tajuddin Ahmed as the first Prime Minister of the country while the government took oath on Apr 17 the same year at Mujibnagar in Meherpur, a part of the Palashi Mango Orchard.

She added: “The (country’s first independent) government had spearheaded the Liberation War of 1971 and finally brought our victory.”

The premier said that it was the Awami League which gives something to the people whenever it comes to power, adding, “The Awami League government stands beside the people during the time of their hardship due to the outbreak of the coronavirus pandemic.”

She went on saying that the leaders and activists of the Awami League, Chhatra League, Juba League, Swechchhasebak League and its other front and associate bodies have been currently working round the clock to reach the relief materials to every doorstep and joining the funeral (of Covid-19 patients) and thus doing everything.

The premier said her party men are now being engaged in planting trees on a larger scale as part of her government’s programme of planting trees across the country marking the birth centenary of the Father of the Nation.

Her party has been observing the programmes of planting trees nationwide by its wing Krishok League since 1984 to protect the environment, she added.

The eighth session of the 11th parliament resumed at 11 in the morning with Speaker of the House Dr Shirin Sharmin Chaudhury in the chair.

At the outset of her speech, the premier said, “On this day I recall with profound respect the greatest Bengali of all times, Father of the Nation Bangabandhu Sheikh Mujibur Rahman. I remember Awami League’s founding president Mawlana Abdul Hamid Khan Bhasani and general secretary Shamsul Haque. I recall with respect Huseyn Shaheed Suhrawardy.”

The premier also recalled the contribution of the Awami League leaders and workers in all the democratic and progressive movements and conveyed her gratitude to those who sacrificed their lives in those struggles and prayed for the salvation of their departed souls.

She however expressed her sadness for not holding the programmes of the Awami League’s founding anniversary and the birth centenary of the Father of the Nation as per the plan due to the coronavisrus outbreak.

“We have postponed the functions to avoid mass gatherings considering the welfare of the people during the situation arising out of the coronavirus pandemic. The programmes had been observed on a limited scale,” she said.

The premier said that the Father of the Nation had been assassinated on Aug 15, 1975 when he took the country on the highway of progress due to the evil design by the new Mir Jafar, Khandker Mustak and Zia.

“Once upon a time, attempts had been made to erase the name of him (Bangabandhu). But it had not been possible. It would never be possible to obliterate the truth,” she said.

In this context, she said that UNESCO had already recognised the historic 7th March Speech of Bangabandhu as part of the world’s documentary heritage, adding that Bangladesh had achieved the victory on Dec 16, 1971 under the leadership of the Father of the Nation.

With an emotion choked voice, the premier said her father Bangabandhu Sheikh Mujibur Rahman had never shared his immense pains and agony that he endured in the jail of Pakistan during his captivity.