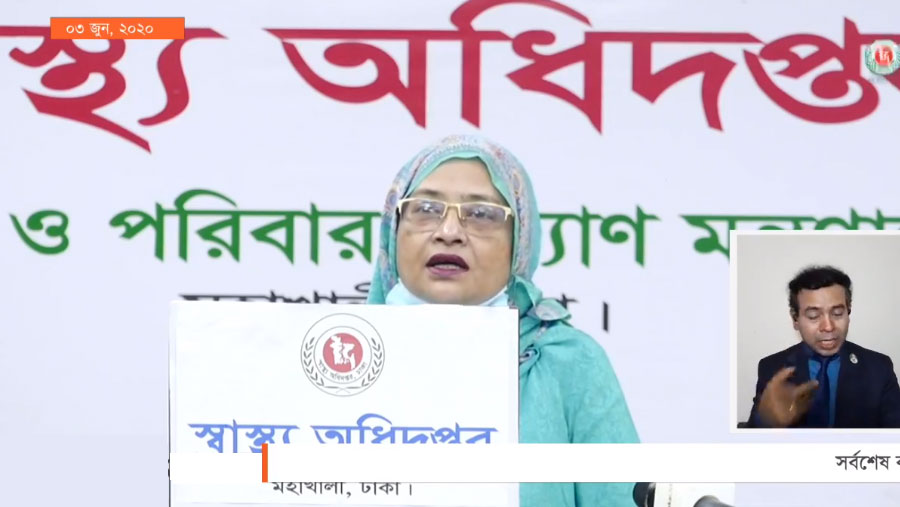 Bangladesh recorded another spike in coronavirus cases on Wednesday (Jun 3) when the health authorities announced detection of 2,695 new patients in the last 24 hours. During this period, 37 patients died, raising the death toll to 746, Prof Dr Nasima Sultana, Additional Director General of the Directorate General of Health Services (DGHS), told a regular online briefing.

Bangladesh’s confirmed cases now stand at 55,140. The mortality rate is 1.35 percent in country, she said.

Bangladesh announced its first cases on Mar 8 and the first death on Mar 18 but it has been seeing a sharp rise in both new cases and deaths in recent weeks.

In the last 24 hours, 470 more patients recovered, Prof Nasima said, noting that so far 11,590 people have made recovery. The recovery rate is 21.02 percent.

Among the deceased, 28 were male and nine were female.

19 of them died in Dhaka division, 13 in Chattogram division, one in Sylhet division, two in Rangpur division and another in Khulna division.

31 patients died at hospitals, five at home while another was pronounced dead upon arrival at the hospital, she added.

Meanwhile, 395 more people were taken into isolation while 137 were released. Currently 6,498 people are in isolation.

During the same period, another 2,428 people were home and institutionally quarantined and 3,145 were released. At present 57,828 people are quarantined across the country.

Dr Nasima urged the media to promote the use of masks. She said many people are still seen going out in public without wearing face masks.

“Your safety lies with you,” she told the people. “We must use masks.”

She said three-layer masks made at home with old clothes can help protect people from coronavirus. “It’s a key took in fight against coronavirus,” she said.

“If we spend Tk 1 for a mask, we’ll get benefits worth Tk 1,000 by keeping ourselves safe. But we must also maintain social distancing and hygiene,” the DGHS Additional Director General said.

“Please wear masks properly. Keep yourself and everyone safe.”