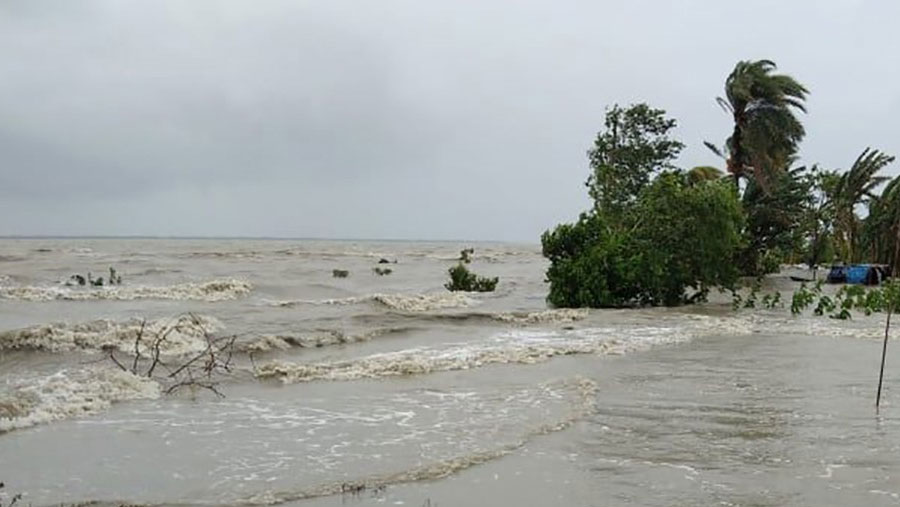 Meteorologists said the “extremely severe cyclonic storm” was packing maximum sustained winds around 160-170 km/h (100-120 mph) and gusts to 190 km/h (120 mph) as it roared ashore with Khulna, Mongla, Satkhira and the Sundarbans absorbing its main brut in Bangladesh part .

“Amphan will threaten the head of the Bay of Bengal region with torrential rain, widespread damaging winds and extreme storm surge as the storm continues to move inland. Kolkata, the capital city of West Bengal, will take a direct hit from the storm,” US-based global storm tracker AccuWeather said.

Initial reports from coastlines suggest the storm ravaged coastlines, washing away coastal embankments at places and claimed so far at least two lives as the onslaught coincided with high tide period.

Bangladeshi met office said the tip of the cyclone hit the coastline just ahead of the evening in southwestern regions including the Sundarbans as predicted earlier and barrelled towards Indian coast.

“The advanced part of the cyclone by now approached West Bengal crossing Bangladesh coast but it would take four to five hours more to entirely cross our territory,” a met office spokesman said.

The cyclone hit as disaster management authorities in the afternoon today said they eventually evacuated over two million vulnerable people to safert mostly in southwestern coastlines as super cyclone Amphan is set to make its landfall in hours.

“So far 2390,307 people have been moved to safety long with over half a million cattle,” state minister for disaster management Enamur Rahman told a virtual media briefing in the afternoon.

He added that the increased number of people, even surpassing a target, prompted authorities to increase the number of cyclone shelters from 12,078 to 14,336″ in 19 of the southern coastal districts.

Officials and Bangladesh Red Crescent Society (BDRC) volunteers reported from the coastal areas that received reports of at least three cyclone deaths with one being a minor child while the storm leveled a huge number of houses, uprooted trees affecting the Sundarbans as well and washed away shrimp enclosures.

The BDRC volunteers also reported crack of two embankments in Koira of Khulna and Southkhali of Shoronkhola along the Sundarbans, which first received the major storm impact a 6.30 p.m.

The cyclone brought with it heavy downpour as predicted while most parts of Khulna region were severely battered by tidal surges and very heavy showers.