Don’t worry, be ready to face any situation to fight corona: PM 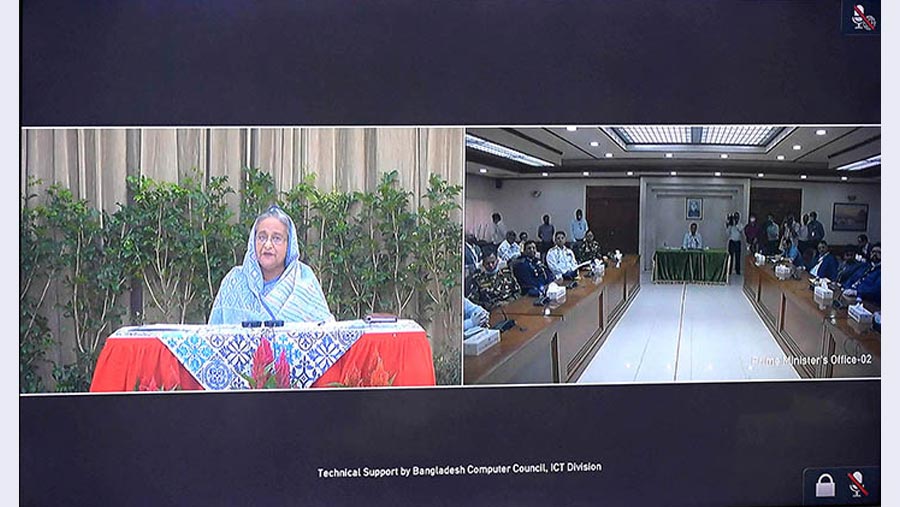 Prime Minister Sheikh Hasina today called upon the people not to worry and be ready to face any situation in the wake of the outbreak of coronavirus across the globe.

She also said it is very much necessary to reach foods to the day-labourers and working class people during this crisis period.

“I’ll tell all that they shouldn’t worry, rather they’ll have to remain prepared for tackling any situation that has risen due to outbreak of the novel coronavirus,” she said.

Sheikh Hasina added: “We’ve to take measures in such a way that we can protect every person of the country (from the deadly disease).”

The PM said this while receiving donation for her relief and welfare fund from various government and private organisations through a videoconference from her official Ganabhaban residence in Dhaka this afternoon, local media reported.

Sheikh Hasina said: “The Bangalee nation was never defeated (in past) and will also not be beaten (in future). We’ll have to move with such self-confidence.”

The PM said Father of the Nation Bangabandhu Sheikh Mujibur Rahman had liberated the country. “We triumphed in the liberation war by taking arms in our hands responding to his call,” she added.

She went on saying: “We’re a victorious nation and we believe that we’ve courage and strength to face any disaster.”

The premier mentioned that the day-labourers, working class and lower middle income people are passing days in hardship as their sources of income have almost stopped due to outbreak of the disease. “So it’s very much essential to reach foods to them,” she said.

Sheikh Hasina, however, said the government has sent food grains to the deputy commissioners (DCs) through the Ministry of Relief and Disaster to distribute those among the poor and distressed people.

“We’re taking measures to provide foods and hand washing soaps for the people up to the union level … the VGF and VGD programmes and other financial assistance that we provide to them will also continue,” she said.

The PM said rickshaw and van-pullers and transport workers, including drivers and helpers, cannot manage foods as they are staying home in the present situation.

“We’ve to think about the people of these classes, prepare a list and reach foods to them,” she said.

Sheikh Hasina said it will not be proper to only confine them to the house, rather arrangements for food and livelihood will also have to be made for them. “We’ll have to give special attention to this end,” she said.

Elaborating her government’s planned measures to fend off the fatal virus, the premier said that after understanding the grave concern over the global outbreak, the government acted very seriously from the very outset of this crisis.

“We started screening the suspects at the airports, along with the arrangement of dedicated quarantine zones for people arriving from the affected countries since January,” she said.

Sheikh Hasina said the government designated hospitals to treat the corona-affected patients, shut down all educational institutions in the country, locked down infection-prone areas to prevent community transmission and advised the people to stay home.

“We closed down all government and private offices and activities, except emergency services, to curb the spread of the virus for 10 days since the 25th of this month. We are unceasingly conducting mass awareness campaigns to protect our people from this lethal virus,” she said.

Stressing the need for ensuring safety of the physicians and nurses and others who are providing treatment, the prime minister said the government has taken necessary initiatives in this regard.

“Besides, different private organisations have also come forward to supply protective gears for them as those are very much essential in the case of treatment of coronavirus patients and I extend my sincere thanks to them,” she said.

Sheikh Hasina also urged the people to follow ‘stay at home’ and health safety rules properly to protect themselves from the deadly virus.

“We’ve to save others from the disease alongside ourselves … with united efforts of all, we’ll be able to overcome the crisis Insha Allah,” she said.

The PM advised the people who went to their villages to produce food grains by utilising every inch of land. “Produce food grains as much as possible as there may have a possibility of dearth of food worldwide due to this crisis,” she said.

Sheikh Hasina mentioned that the soil of the country is very fertile and the people are very labourious. “So, if we work hard we could help other countries by providing foods after meeting our domestic demand,” she said.

In this connection, the PM said the country has sufficient stock of food. “There will be no crisis of food grains for the next one year and till the harvest of next crop,” she added.

Many friendly countries of Bangladesh have sought help to contain the coronavirus, Sheikh Hasina said, adding: “We’re ready to help them.”

The PM said nobody was detected with coronavirus in the last 24 hours like yesterday. “It’s a good sign and we’ll have to keep up this situation,” she said.

Sheikh Hasina urged the people to pray to Allah to save the countrymen as well as the people of the entire world so that they are saved from this great danger.

The PM thanked the individuals and organisations that donated to her relief and welfare fund.

On behalf of the premier, her Principal Secretary Dr Ahmad Kaikaus received the cheques for the donation from the officials of the organisations at the Prime Minister’s Office.