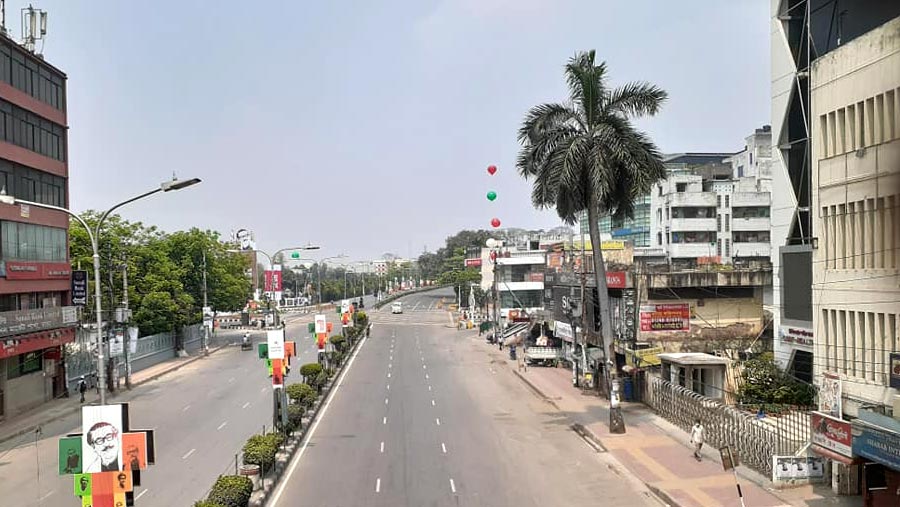 Dhaka city was verticality deserted as plying of all mass transports has remained shut down across the country to avert the spread of the deadly virus.

Following the government’s decision, all the avenues and roads in the capital including the small roads are now out of vehicles including the three-wheelers, even the rickshaws could hardly be seen.

Offices, business houses, markets and shopping malls except the pharmacies and groceries are also remained closed while people are hardly seen walking on foot on the roads.

Like the other countries of the globe, Bangladesh is also experiencing the spread of COVID-19 and the government has already declared General holidays till Apr 4 to check the spread of this deadly virus.

Prime Minister Sheikh Hasina in her address before the nation has urged the countrymen to stay at home to stop spreading of this virus.

Members of the different law enforcement agencies alongside the personnel of Bangladesh Army are patrolling on the roads and highways to ensure that people stay at their homes in such a situation.

The mass road transports was shut from Thursday while communication through river ways, railways and airways were shut earlier having only ferry operations in limited scale for which the roads and highways turned into a deserted state.

Talking to media, Sayedabad Inter-District Bus Owner’s Association President Abul Kalam said no single bus left the terminal today and there was no passenger here. “Such situation was never created in the past and the transport workers of our terminal are passing their time in idle. Now I have made arrangement for their cooking and food.”

Earlier on Mar 24, Road Transport and Bridges Minister and Bangladesh Awami League General Secretary Obaidul Quader in a video message announced that all sorts of mass transports would remain shut from Mar 26.