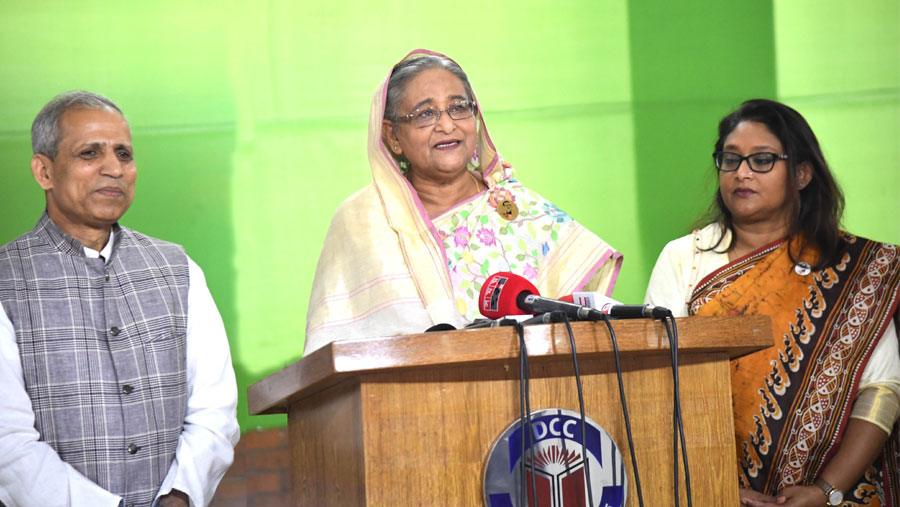 Prime Minister Sheikh Hasina today urged the people to refrain from buying excessive goods after being panicked, saying categorically that the country has adequate stock of food grains. In this connection, the PM said there should be a strong vigilance both from the authorities concerned and the people so that none can hoard essential goods cashing on the novel coronavirus outbreak.

“Hiking the price of essential commodities by excessive unnecessary purchasing after being panicked is a ‘garhito’ (reproachable) act … all will have to abstain from it,” she said.

The PM said this while talking to reporters after casting her vote in the Jatiyo Sangsad by-polls to Dhaka-10 constituency at Dhaka City College this morning, local media reported.

Sheikh Hasina, also the Bangladesh Awami League president, said: “We’re observing that being frightened, some people are storing foods after purchasing those excessively.”

“But I want to say clearly that we’ve no problem of foods … we’ve adequate stock of food grains. So there is no need to buy excessive goods after being panicked.”

The premier said she has already held meetings with the finance minister, finance secretary and the Bangladesh Bank governor in this regard.

“We’ve an ability to purchase foods for the next one year through the reserve we have. So there is no reason to be worried to this end,” she said.

Sheikh Hasina said there are 17 lakh metric tons of food grains in the government warehouses apart from 3:50 lakh MT wheat.

“Besides there are a huge quantity of food grains in the private rice mills. So I would like to request all to buy goods (essential) that are necessary for them,” she said.

Sheikh Hasina said the prices of essential commodities soar if markets witness a pressure due to purchasing of excessive goods by the people.

She said those who have enough money can buy goods in huge quantity. But the common people and the people with limited income don’t have such a capability to purchase commodities in big amount, she added. “So there is no right of anybody to inflict pain to others,” she went on saying.

Citing an example, the PM said: “I’ve watched (on TV) that a person said she bought 30 kgs of salt. I don’t know he will consume that salt on how many days.”

Sheikh Hasina said earlier many people purchased a huge quantity of onion when its price surged. “But they had to dump in the garbage as the onion was rotten,” she said.

The PM said the people should remain careful alongside the government so that none can hoard essential commodities in view of the coronavirus outbreak. “I’ll tell the common people to keep a strong vigil in this regard,” she said.

Sheikh Hasina said it is not proper to create pressure on the market by purchasing goods excessively. “We want everybody to lead a normal life … we’re the people of Bangladesh and we’ve soil and everything,” she said.

The PM said the government has taken necessary measures to keep the country free from the deadly coronavirus.

“We had taken measures immediately when the virus broke out in China. We brought back our 315 students from China and released them after keeping them in quarantine for 14 days,” she said.

Sheikh Hasina said those returning from abroad are being examined at the airports and land ports. “If anybody is suspected to be infected with the virus, he or she is being sent to quarantine,” she said.

In this regard, she said those who are returning from abroad will have to be kept in quarantine for at least 14 days for the safety of the family members and other people.

The premier said the health department and the IEDCR remain alert and are conducting research to check the lethal virus in the country.

“We’re taking steps so that the people stay careful and in this case, we can say that Bangladesh remains comparatively better,” she said.

Sheikh Hasina said the government has specified a number of hospitals to treat the coronavirus-infected patients. “We’ve also made arrangements for the safety of the physicians, nurses and others working in the hospitals,” she said.

“We’re importing and also producing masks and personal protective equipment (PPE) locally for the doctors and nurses. We’re continuing to procure whatever necessary for them,” she said.

The PM said the government is carrying out campaign through television, radio and other medium to alert the people about the deadly virus.

“I hope that the countrymen will abide by the instructions,” she said.

Sheikh Hasina said the government has imposed a ban on gathering of the people to protect them from the virus.

“We’ve postponed many programmes taken to celebrate Bangabandhu’s birth centenary, and through this, you can realise that how much importance we have given to the public safety and health,” she said.

The PM said: “We’ve gotten a scope to celebrate the birth centenary of the Father of the Nation for once and we’ll no more get such an opportunity. Then, we’ve postponed the birth centenary programmes in the interest and wellbeing of the people,” she said.

“We’ll also cancel the programmes where gathering of the people will be made so that the virus is not spread across the country,” Sheikh Hasina added.

Hinting at scrapping the programme of placing wreaths at the National Memorial on Mar 26 next on the occasion of the Independence Day, the premier said: “I will discuss the issue and it seems that it will also have to be postponed.”

The PM advised the people who returned from abroad not to roam here and there so that the family members and the common people are not infected by the virus.

“If you move freely, you, your family members and other people may be infected by the virus. So it’s not proper to put the life of others in danger and I hope you’ll remain careful in this regard,” she said.

Sheikh Hasina called upon the people to eat seasonal fruits which prevent diseases and stay at the house as much as possible instead of roaming here and there to protect themselves and the family members.

She urged the countrymen to pray the Almighty Allah so that the humankind, especially Bangladesh and its people remain freed from the deadly disease.

About the Dhaka-10 by-polls, the premier hoped that the people will cast vote for ‘boat’ Insha Allah. “We’ll win in the polls Insha Allah,” she said.

PM’s daughter Saima Wazed Hossain and Awami League candidate in the constituency Md Shafiul Islam Mohiuddin and secretaries concerned to the premier were present on the occasion.