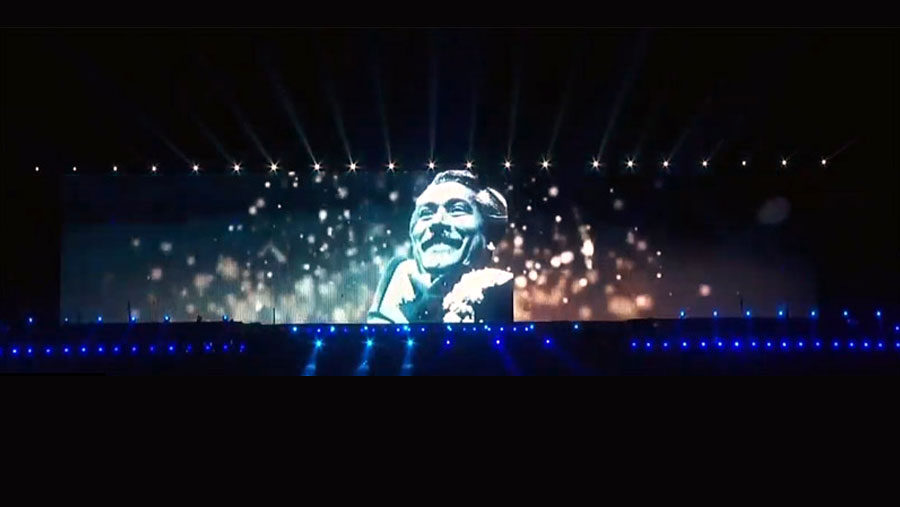 The skyline of the capital Dhaka and rest of the country were illuminated with grand fireworks as Bangladesh kicked off the Mujib Year celebrations marking the birth centenary of Father of the Nation Bangabandhu Sheikh Mujibur Rahman.

“His ideals are our eternal source of inspiration,” President Md. Abdul Hamid said opening the centenary celebrations in a nationwide televised speech as the country witnessed the illuminated skylines with the staging of the main fireworks at the historic Suhrawardy Udyan.

In an emotion-choked recorded televised statement followed by the President, Prime Minster Sheikh Hasina said the nation would stay awake forever with its founder’s ideology and uphold the flag given by him.

“Father, sleep in peace . . . your Bangladesh is marching towards advancement at an indomitable pace and will go ahead further,” said Sheikh Hasina, who is Bangabandhu’s elder daughter as well.

Despite the scaled down festivity revising the original celebration opening plans in view of the global coronavirus pandemic, the capital Dhaka appeared jubilant with sounds of fireworks and illumination at 8 p.m., the birth moment of Bangabandhu 100 years ago.

The state-run BTV and private TV channels broadcast their speeches while mainstream newspapers carried online special editions with emotional headlines, one of those saying “Bangabandhu has no death, only birthdays”.

Another newspaper wrote “His (Bangabandhu’s) public life started as a schoolboy. And it never stopped till his last breath when he, along with all members of his immediate family, save the two daughters, Hasina and Rehana, were brutally murdered on 15th August 1975”.

Sheikh Rehana also gave a brief statement which was followed by recitation of a poem titled “Baba” by Sheikh Hasina, written by her younger sister.

Leading artistes performed songs and dances mostly in the backdrop of the songs by the nation’s two major poets Rabindranath Tagore and Kazi Nazrul Islam.

The programme included as well exclusive performance of renowned musical instrument players and recitation of poems by famous poets.

The two-hour inaugural function ended after another firework at the South Plaza of the Jatiyo Sangsad.

Fireworks were also arranged and lantern (fanush) were released across the country including in front of Bangabandhu Bhaban, AL Bangabandhu Avenue central office, Rabindra Sarobar, Hatirjheel and Teacher-Student Centre on Dhaka University campus.

Central 14-party leaders and workers observed a lamp lighting programme on the premises of the Jatiya Sangsad Bhaban at 8pm and they marched towards Bangabandhu Bhaban at Dhanmondi 32 to pay tributes to Bangabandhu by placing wreaths at his portrait.

Under the original plan, the celebration was set to be opened drawing thousands of people at the National Parade Ground today.

However, the global coronavirus pandemic forced them to limit the inauguration fanfare revising the schedule trying to keep most of the programmes indoors to discard public gatherings.

A scheduled gathering of children at Tungipara and in primary schools across Bangladesh today were also scrapped due to COVID-19.

The countdown for Mujib Year began on Jan 10 last coinciding with Bangabandhu’s Homecoming Day in 1972, after nine months of captivity in Pakistan.

On Mar 17, one hundred years ago, Bangabandhu was born in a respected family at Tungipara village of the then Gopalganj sub-division, now district, as the third among six children of Sheikh Lutfur Rahman and Saira Khatun.

The history had set his course to be the architect of independent Bangladesh and the greatest Bangalee of all times after protracted struggle and personal sacrifices.

The government declared the period from Mar 17, 2020 to Mar 26, 2021 as the ‘Mujib Year’ marking the birth centenary of Bangabandhu. Along with Bangladesh, the ‘Mujib Year’ is being celebrated globally with the initiative of UNESCO.

The day is a public holiday in Bangladesh and it also observed as National Children’s Day.

Sheikh Hasina, Bangabandhu’s elder daughter, also placed wreaths at Bangabandhu’s portrait at the Bangabandhu Memorial Museum at Dhanmondi Road No 32 in the capital this morning ahead of travelling to Tungipara.

Different socio-cultural and political organisations from grassroots to national levels, ministries and divisions drew up programmes to celebrate the birth centenary opening.

President Md. Abdul Hamid and Prime Minister Sheikh Hasina also paid their homage by placing wreaths at the mazar (mausoleum) of Bangabandhu at Tungipara in Gopalganj.

After placing the wreaths, they stood in solemn silence for some time as a mark of profound respect to the memory of the Father of the Nation while the bugle played the last post.

Abdul Hamid and Sheikh Hasina offered Fateha and joined a munajat seeking eternal peace of the departed souls of Bangabandhu as well as other martyrs of the Aug 15 carnage.

Besides, a delegation of the party’s central working committee led by AL President and Prime Minister Sheikh Hasina paid homage to Bangabandhu by placing a wreath at his mazar (shrine).

Special prayers were arranged at all religious institutions across the country while orphans and destitute people were served special foods.

Under the initiative of Dhaka City North Awami League, orphans and destitute people were given foods and sweets on the premises of Baitul Mukarram National Mosque and Banani Korail slum. Identical programmes were held across the country.

Environment, Forest and Climate Change Ministry has taken an initiative to plant around one crore saplings across the country.