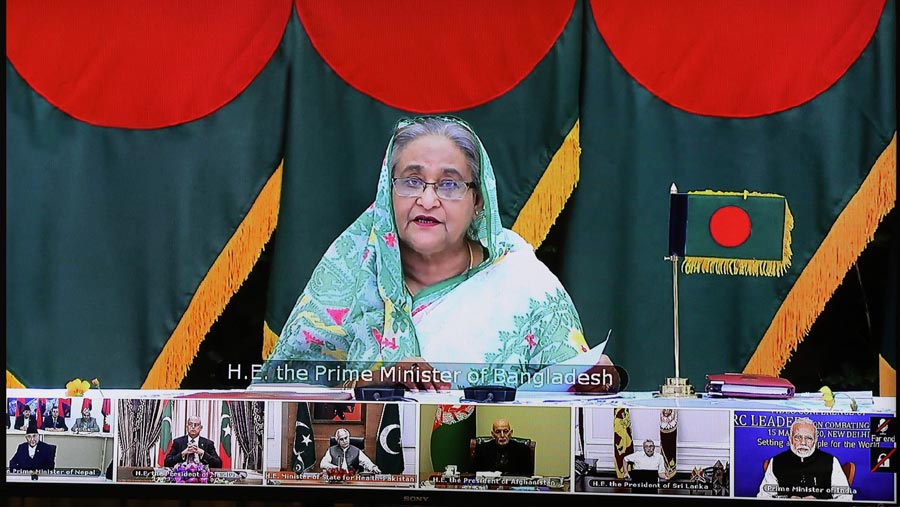 Prime Minister Sheikh Hasina on Sunday (Mar 15) called for a strong collaboration among SAARC nations in devising a collective strategy and mobilising resources to combat coronavirus as she joined a videoconference with her counterparts and leaders in the region.

“We need to devise a strong SAARC-wide strategy to combat this public health threat and to protect our citizens,” she said while addressing the virtual summit on combating coronavirus or COVID-19 from her official Ganabhaban residence in Dhaka in the afternoon, local media reported.

The Bangladesh premier added: “We need to forge collaboration through our collective capacity, expertise and resources.”

“The whole world is suffering . . . I think for the first time it is happening,” Sheikh Hasina said referring to the gravity of the crisis.

She suggested that the South Asian Association for Regional Cooperation (SAARC) secretariat could coordinate the regional collaboration on the coronavirus for the safety and security of the people in the region.

Indian Prime Minister Narendra Modi took the initiative for the summit of the SAARC leaders and moderated the conference.

He proposed creation of a special voluntary fund to fight coronavirus, offering on behalf of his country an amount of US$10 million for the fund of the eight-nation grouping of India, Pakistan, Afghanistan, Bangladesh, Bhutan, the Maldives, Nepal and Sri Lanka.

Sheikh Hasina said Bangladesh was ready to share its capacity and expertise, as well as the best practices with the SAARC countries, including providing logistic support, if required.

She proposed for establishing an institution in Bangladesh to prevent and fight against any public health threat in the South Asian region in future.

“We believe it is extremely important to establish an institution to prevent and fight against any public health threat in the South Asian region in future, and Bangladesh will be happy to host such an institution if you all kindly agree,” Sheikh Hasina said.

The premier said SAARC countries need to work together jointly in close collaboration for addressing challenges like disease control and climate change saying “Let’s not forget how we all are interconnected in today’s world”.

Sheikh Hasina thanked the Indian premier for initiating this useful videoconference, adding “I look forward to being in touch with you all, Excellencies, as required and hopefully together we can ensure safety of our peoples in this pandemic situation”.

The premier suggested the regional dialogue to continue at technical-level involving health ministers, health secretaries, and relevant health experts can also have this kind of videoconferences to discuss specific areas of cooperation.

“World Health Organization (WHO) South-East Asia Regional Director may be invited to these videoconferences,” she said.

Sheikh Hasina said the issue of healthcare has been incorporated in the SAARC Charter. “So we can work together and share our experiences if any problem arises in future,” she said.

The PM thanked the Indian premier for taking this initiative and said that after a long time the SAARC leaders have become together.

Sheikh Hasina appreciated and welcomed the Indian premier’s different proposals and ideas, including creation of a special voluntary fund, to fight coronavirus in the region.

“Our officials and experts will sit together and implement the proposals after examination as I feel that we need to work together,” she said.

She went on saying: “Our joint efforts could save the lives of the people of the region from the onslaught of coronavirus and we can make progress in this area (through it),” she said

“I hope that we’ll be able to combat the situation and ensure safety and security of the people of South Asian region,” she said.

Sheikh Hasina asked the officials concerned to continue dialogue in this regard, saying that it is very important at this moment for the people of the SAARC countries.

She thanked the Indian premier for bringing and hosting 23 of Bangladeshi students from Wuhan in China along with Indian students during the quarantine period.

The premier said Bangladesh successfully contained entry of the virus through strong surveillance and rigorous checks-up at all international airports, sea ports and land ports.

“As of now, we had only three COVID-19 imported cases. They have already recovered. There are two new imported cases, from Europe. We have no local or community transmission of any COVlD-19 case,” the premier said.

Sheikh Hasina said the government has formed a national committee to provide guidance to concerned people from all ministries at all levels.

The premier said her party Awami League at all levels is active in raising awareness, while local body representatives are vigilant to enforce home quarantine, if necessary.

The premier said a few vacant buildings have been identified where makeshift hospitals can be established in case there is any such need.

“We also have trained health workers at upazila levels and school children are also being trained to follow necessary personal hygiene,” she said.