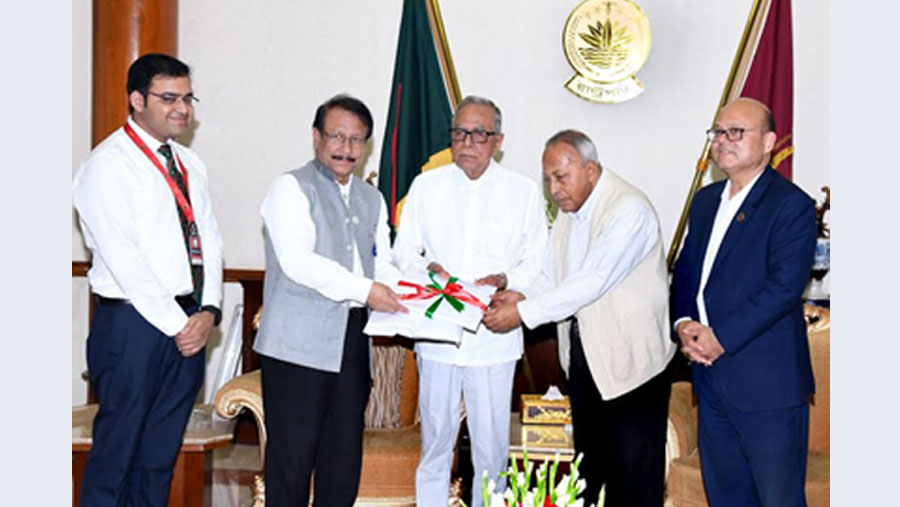 “The young generation will play an active role in different nation building activities imbued with the spirit of 1971 Liberation War and ideal of Bangabandhu,” he said while a delegation of Bangabandhu’s Birth Centenary Celebration National Implementation Committee called on him at Bangabhaban here in the evening.

The head of the state said the birth centenary of Bangabandhu on Mar 17 is not only a unique day for the Bangalee nation but also it is the day of joyousness indeed. During the meeting, president of the Bangabandhu Sheikh Mujibur Rahman’s Birth Centenary Celebration National Implementation Committee National Professor Rafiqul Islam and its Chief Co-coordinator Dr Kamal Abdul Naser Chowdhury handed over different publications on the occasion of Mujib Year” to the President, Abedin added.

Chief coordinator of the committee Dr Kamal Abdul Naser Chowdhury apprised the President of various programmes taken by the committee on the occasion of Mujib Year.

He informed the President that the “Mujib Year” programmes have been rearranged due to the prevailing situation across the world caused by the coronavirus outbreak.

President Hamid was informed that the birth time of Bangabandhu will be observed through fireworks at 8 pm.

After that, the other formal programmes including the recorded speeches of the President and Prime Minister Sheikh Hasina will be aired live on the day.

Other programmes will also be observed avoiding massive public gatherings, Dr Chowdhury added. The programmes at Dhanmondi 32 in the capital and Tungipara in Gopalganj will be held as usual, he added.

Doa mahfil will be held across the country, but other programmes including those at the educational institutions will be organised on the limited scale.

Secretaries concerned to the President were also present there.