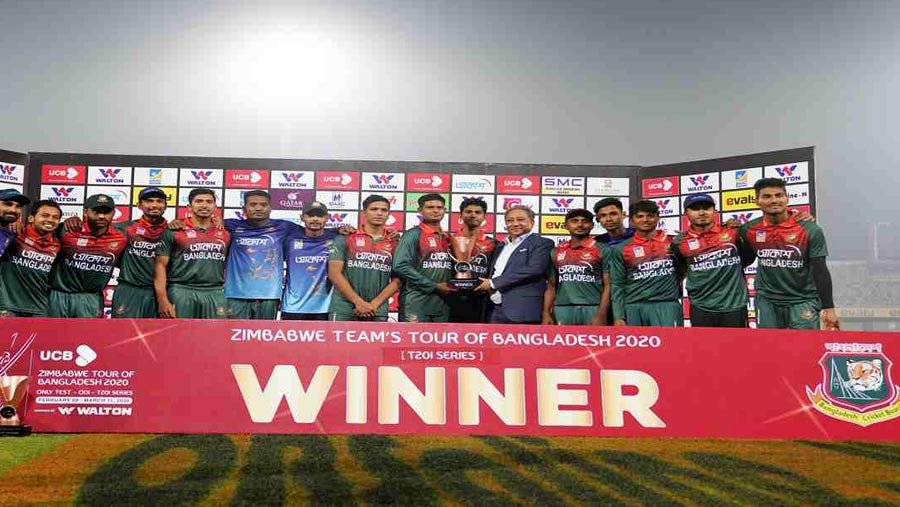 Bangladesh have completed their first all-format whitewash with a dominating 9-wicket win over Zimbabwe in the second and final Twenty20 international. Opener Liton Das starred with an unbeaten half-century as the Tigers reached the target of 120 for victory with 25 balls in hand at the Mirpur Sher-e-Bangla National Cricket Stadium in Dhaka on Wednesday (Mar 11).

Liton Das continued his rich vein of form as Bangladesh inflicted a whitewash on Zimbabwe in T20 series too, recording a facile nine-wicket win in second and final match at the Sher-e-Bangla National Cricket Stadium on Wednesday (Mar 11).

By doing so, the Tigers, who won the one-off Test and swept three-match ODI series, completed the series sweep over Zimbabwe.

Zimbabwe who was asked to bat first in the final match of the series was able to put up just 119-7 following a disciplined bowling show of the Bangladeshi bowlers. However later the hosts’ batsmen made it a cake-walk, reaching the winning target for 120-1 in 15.5 overs.

Having hit 39 ball-59 in the first match, in form Liton Das led the emphatic victory yet again, smashing an unbeaten 60 off 45, sending the ball across the rope for eight times. He was adjudged the Player of the Match, and series too.

Liton and Naim Sheikh who got his chance after Tamim Iqbal was given rest, added 77-run for the opening stand to take Bangladesh closer to a victory.

Chris Mpofu broke the partnership, dismissing Naim for 33, after it looked Bangladesh is heading towards a 10-wicket victory for the first time.

Liton, who struck two centuries in the ODI series including Bangladesh’s individual highest 176, kept his composure and brought his fourth half-century by flicking Sikandar Raza for single off 35 balls.

Soumya Sarkar played a perfect foil to him in the other end to hasten the victory as he struck 20 off 16 with two towering sixes.

Brendan Taylor who opened the innings after his side was asked to bat first, battled lonely against spirited Bangladeshi bowling attack to score an unbeaten 59 off 48 with six fours and one six.

It was his only half-century plus knock in the series in which he was just of his shadow.

Craig Ervine was other notable scorer with 29 and added a 57-run partnership with Taylor but that came at slower pace – just shed over six runs per over.

When Afif Hossain removed Ervine after he smote three boundaries in his innings, Zimbabwe wickets were tumbling at regular interval.

With no batsmen giving him the adequate support, Taylor single handedly kept the side flowing and brought up his sixth T20 half-century.