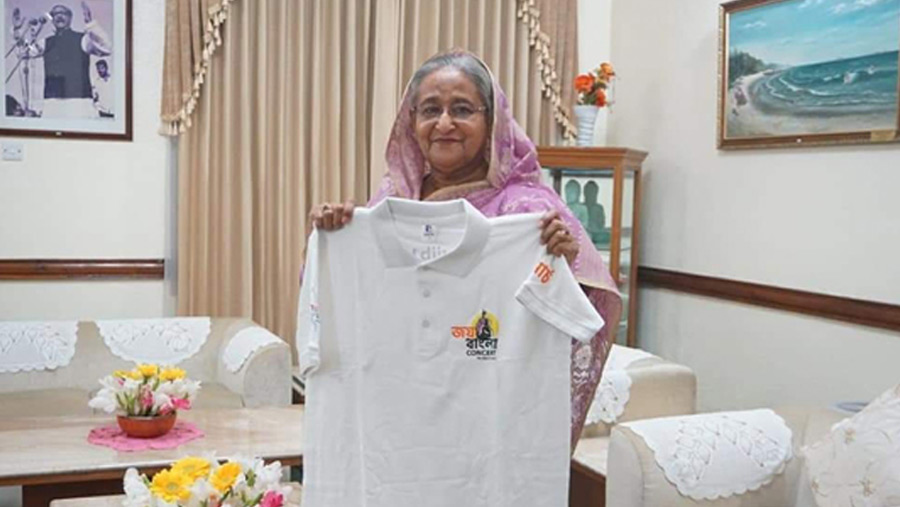 Prime Minister Sheikh Hasina has received t-shirts, mugs and posters of the upcoming ‘Joy Bangla Concert 2020’ to be held on Mar 7. Trustee of Centre for Research and Information (CRI) and State Minister for Power, Energy and Mineral Resources Nasrul Hamid Bipu handed over these souvenirs to the PM at her official Ganabhaban residence in Dhaka on Saturday (Feb 29), local media reported.

According to a CRI statement, the annual Joy Bangla Concert will be staged at the Bangladesh Army Stadium on Mar 7 to rekindle the historic 7th March speech of Father of the Nation Bangabandhu Sheikh Mujibur Rahman.

Young Bangla - an initiative of the CRI and a leading youth network of the country - is hosting the mega event every year since 2015 to revive the spirit of Liberation War among young generation.

This year, the event will get a different dimension as the nation is going to celebrate ‘Mujib Borsho’ (Mujib Year) from Mar 17 marking the birth centenary of Father of the Nation Bangabandhu Sheikh Mujibur Rahman.

Like the previous years, the band groups will enthrall the audience by performing songs of the ‘Swadhin Bangla Betar Kendro’ (Independent Bangla Radio Station) as well as their own songs.

Registration for the event will commence shortly, and for this valid national ID, passport or birth registration certificate, phone number and email address will be required.

The event will be open for all, the statement added.