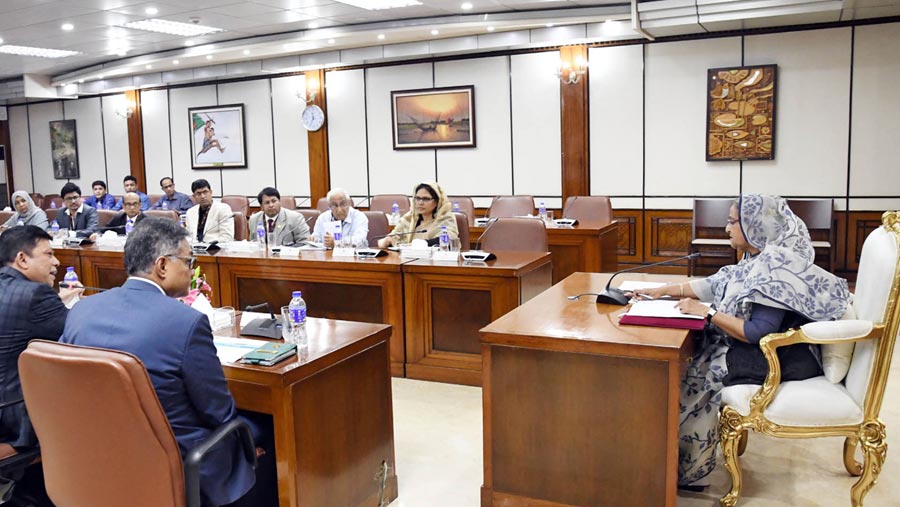 Prime Minister Sheikh Hasina on Sunday (Feb 23) asked the authorities concerned to take plans of development projects in such a way that one becomes complementary to another, local media reported.

“Once plans (of development projects) are taken, they should be integrated and complementary to each other,” she while witnessing a power-point presentation on the realignment of the Hatirjheel part of Sonargaon-BUET Link of the Dhaka Elevated Expressway under the PPP Project at the Prime Minister’s Office in Dhaka.

After witnessing the presentation, the premier gave her consent to the newly designed alignment of the Dhaka Expressway which will connect Palashi via Kataban beside the south side of BIAM (Bangladesh Institute of Administration and Management) building through the periphery of the Hatirjheel lake.

She added: “This is ok. You can implement it (the proposal of realignment of Hatirjheel part of Sonargaon-BUET Link of the Dhaka Elevated Expressway).

The Link will benefit dwellers in old Dhaka city and Dhanmondi as it was estimated that some 20 percent of traffic vehicles enter through the link.

In the earlier proposal, the alignment of the link was proposed through the middle of the Hatirjheel Lake and the Panthakunja. But, the premier asked the authorities to redesign the proposal protecting the lake and Panthakunja.

In this context, the premier said that once there was a big jheel (water body) at Motijheel, but Pakistani ruler Ayub Khan had destroyed it.

She also asked the authorities concerned to take development plans by protecting the water bodies particularly the ponds.

Noting that the Dhaka city is being developed in an unplanned way, the premier said, “But, we are giving all the facilities of the city to the villages. So, the migration of the village people towards the capital city has been decreasing.”

In this regard, she said the schools, colleges and other organisations of the districts had earlier witnessed developments, as the ministers, lawmakers and government officers stayed in the districts.

“People are crossing the roads though there are the foot-over bridges and underpasses while the passersby and the drivers also do not follow the rule of zebra crossing,” she continued.

The 46.73-kilometer (in total) Dhaka Expressway project is being constructed at a cost of Tk 8,940.18 crore under the Public Private Partnership (PPP).

Communication expert and BUET teacher Prof. Md Shamsul Hoque gave the presentation on the re-alignment of the Hatirjheel part of Sonargaon-BUET Link of the Dhaka Elevated Expressway.

Convenor of the project expert committee of Prof Jamilur Reza Choudhury and its member architect Iqbal Habib made their contribution to the presentation.

Earlier, the premier witnessed another presentation on the amended plan of the buildings under Joyeeta Tower Construction Project at her office.

The PM gave necessary directives after the presentation.