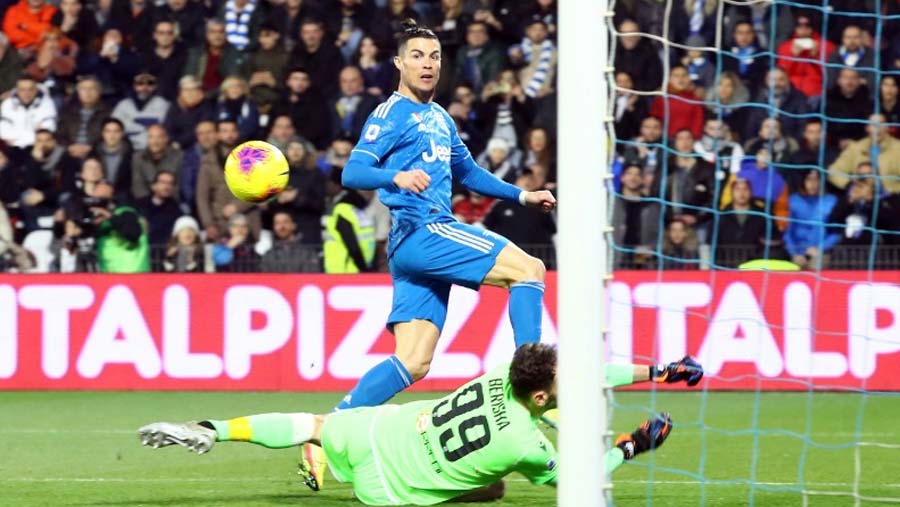 Cristiano Ronaldo made his 1,000th appearance for club and country when he took to the field for Juventus against SPAL in Serie A on Saturday (Feb 22). The Portugal superstar was named in Maurizio Sarri's starting XI after being rested for the 2-0 win over Brescia last weekend.

The 35-year-old came through the warm-up unscathed to bring up his incredible landmark and seek to add to his tally of 724 goals.

It's the five-time Ballon d'Or winner's 73rd outing for Juve, with the bulk of his matches having come for Real Madrid (438).

Manchester United sit second on that list (292), with 31 of his games coming for Sporting CP, a further two for Sporting B and 164 for his country.

CR7 met Juan Cuadrado's cross to equal the Italian top-flight record, shared with Gabriel Batistuta and Fabio Quagliarella. Aaron Ramsey added a second for the Serie A leaders in a 2-1 win over SPAL.

Ramsey's delightful finish on the hour, in which he chipped the ball over goalkeeper Etrit Berisha after great work by Paulo Dybala, proved decisive - as Andrea Petagnalater pulled one back for bottom side SPAL from the penalty spot.

Victory sees Maurizio Sarri's Juventus move four points clear at the top of Serie A, with title rivals Lazio and Inter Milan not in action until Sunday.

Portugal international Ronaldo, who also struck the crossbar with a free-kick in the closing stages, has scored 16 times during his record-equalling 11-game run in the league.

With 36 goals in 36 games for club and country this season, Ronaldo will have the opportunity to break the Serie A record goalscoring streak against Inter Milan on Sunday (Mar 1).