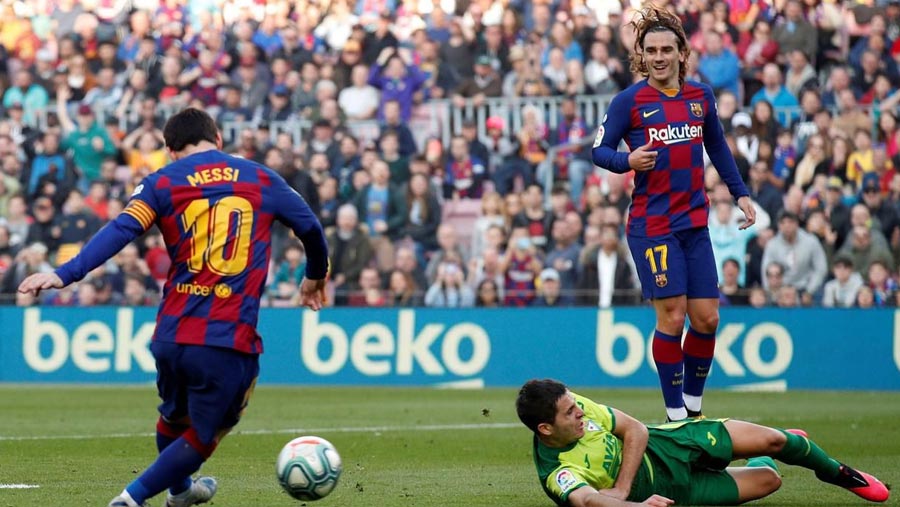 F.C. Barcelona captain Lionel Messi was in a prolific mood as his side crushed Eibar 5-0 at home in La Liga on Saturday (Feb 22), scoring four goals to placate supporters who began the game by showing their discontent with president Josep Maria Bartomeu.

The win took Barca back to the top of La Liga on 55 points, two ahead of Real Madrid who visit Levante later on Saturday, and gave them a boost before the Champions League last-16, first leg tie at Napoli on Tuesday and next week's showdown at Real.

Messi had not scored in his previous four games but put the Spanish champions ahead in the 14th minute by dancing and barging his way past three players to slot home for the opener.

He doubled the lead in the 37th with an equally impressive strike before completing his treble moments later and netted his fourth goal late in the second half before Arthur Melo completed Barca's biggest league win of the season with a tap-in.

"Messi has been doing this for 15 years and he's going to keep doing this, he is a guarantee for any team," said Barca coach Quique Setien.

"The reality is that he is always causing trouble for the opponents, and if he's not scoring goals he's setting them up. That's why he is the best in the world, because he solves problems that others can't."

The Argentine's goals cheered fans who began the match waving handkerchiefs and calling for Bartomeu to resign after the club was embroiled in a scandal involving a firm hired to monitor coverage of the team on social media.