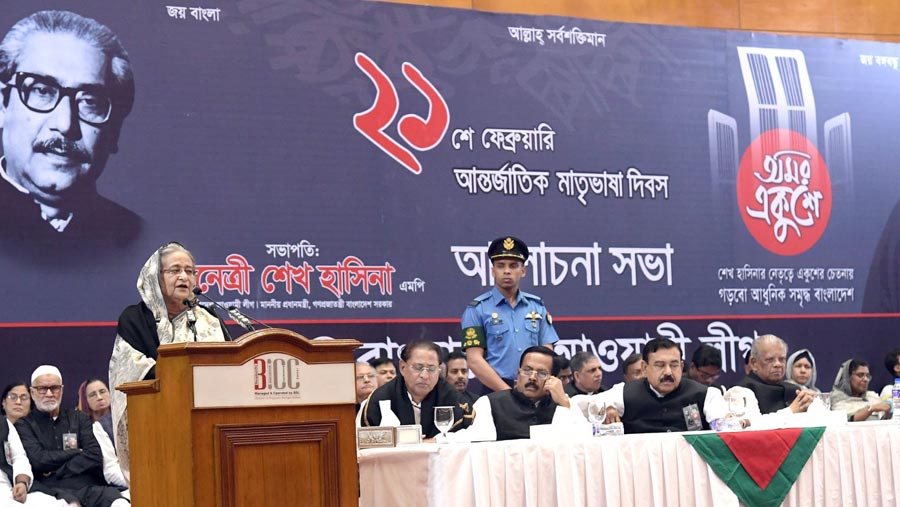 Prime Minister Sheikh Hasina on Saturday (Feb 22) reiterated her determination to make Bangladesh a technology and knowledge-based dignified nation along with ensuring economic emancipation of the countrymen.

“Side by side with ensuring economic freedom of the people, we want to build the Bangalee nation as a modern technology and knowledge-based country in the international arena and through it, we also want to materialize Bangbandhu’s dream of establishing a hunger and poverty-free Sonar Bangla,” she said.

Sheikh Hasina, also the president of Bangladesh Awami League, was addressing a discussion at Bangabandhu International Conference Center (BICC) in Dhaka in the afternoon.

The PM said the government is advancing the country not only economically, but also has given importance to the technology-based education.

“We’ve ensured scopes for the people to use various types of modern technologies like internet service and mobile phones,” she said.

“Once Bangladesh was known as a country of famine and natural disasters like cyclone and tidal surge. But by the grace of the Almighty, none can now call Bangladesh in these words,” she said.

The PM said the language martyrs protected the dignity of the mother language by sacrificing their lives. “Following their footprint, we earned independence in exchange for blood of three million martyrs,” she said.

Sheikh Hasina said: “Their sacrifice cannot go in vain and we’ll not allow it to go in vain and it’s our commitment … we will build Sonar Bangla as dreamt by Bangabandhu and celebrate Mujib Borsho successfully with this pledge.”

Eminent poet Tarik Sujat recited a poem in memory of the martyrs of the language movement.

At the outset of the discussion, a minute’s silence was observed in memory of the martyrs of the Language Movement and the Liberation War and Father of the Nation Bangabandhu Sheikh Mujibur Rahman and martyrs of the Aug 15 carnage.

Recalling Bangabandhu’s contribution to building the war-ravaged country, the prime minister said Bangladesh was recognized as a least developed country within three and a half years of its independence due to his pragmatic leadership.

“But the country’s uplift was stalled after the assassination of the Father of the Nation in 1975,” she said.

Accusing Khandakar Moshtaque and General Zia of their involvement in the killing of Bangabandhu, Sheikh Hasina said the Pakistani rulers tried to hang him. “But they could not succeed. However, the defeated enemies of the 1971 with cooperation of their local collaborators took the revenge of their defeat by killing Bangabandhu,” she said.

In this connection, the premier said many of the killers visited their house regularly before the assassination of the Father of the Nation.

“Those whom my mother entertained by cooking were involved in the killing and such an incident would not happened, had killer Moshtaque and Zia not patronized them,” she said.

Sheikh Hasina said after the killing, the contributions of Bangabandhu were erased from the language movement and the liberation war. “But the history could never be wiped out and suppressed-it’s now the proven truth,” she said.

In this connection, Sheikh Hasina spelled out development in different sectors, including agriculture, education, health, economy and digitization. “Bangladesh is moving fast and it’ll continue to advance,” she said.

The premier said her government has already announced that it will light up every house in the Mujib Year. “We do not want a single person to remain homeless, hungry and without treatment and we’re working to attain the goal,” she said.

In this connection, Sheikh Hasina asked the party leaders and workers to supplement the government’s strides so that not a single person remains homeless.

“We’ll construct houses for the landless and homeless as well for those who lost houses by river erosion so that everyone gets an address,” she said.

Referring to Bangabandhu’s outstanding contributions to the Language Movement, the prime minister said he got involved in the language movement at its beginning.

She mentioned that Bangabandhu Sheikh Mujib then said no nation can tolerate the humiliation of the mother tongue. According to his proposal in 1948, the Rashtrabhasha Sangram Parishad (State Language Movement Committee) was formed in association with Chhatra League, Tamddun Majlis and other student organizations, Sheikh Hasina said.

The premier said Bangabandhu was the main driving force behind all subsequent movements and he had to endure a lot of persecution while fighting for the mother tongue.

She said Bangabandhu was kept behind the bar at a stretch from 1949 to 1952 for his role in the language movement.

Referring to her government’s steps for upholding the dignity of mother language, Sheikh Hasina said her government is working relentlessly to ensure the use of Bangla at all levels and sectors of Bangladesh.

“We’re also working for proper preservation of the mother languages of various ethnic minorities,” she said.

The premier said due to timely initiatives of her government and efforts of some Canada expatriate Bangladeshis, the UNESCO on Nov 17, 1999 declared Feb 21 as the International Mother Language Day in memory of the martyrs of the great Language Movement.

“When we got this recognition, we took a decision that we will set up an international mother language institute and accordingly, I along with the then UN secretary general Kofi Annan laid its foundation stone on Mar 15 in 2001,” she said.

She said but the BNP-Jamaat alliance after coming to power in 2001 stopped its work. “Not only they stopped the work of the International Mother Language Institute, but also cancelled all development projects that we had taken,” she said.

The PM said with a huge mandate of the people the Awami League formed the government in 2009 again and resumed the work of the institute.

The premier said the International Mother Language Institute has already been accredited as Category II Institute of UNESCO.

“Through this recognition, our love for language has got widened in the world,” she said.