BNP calls strike in Dhaka for Sunday, AL to resist 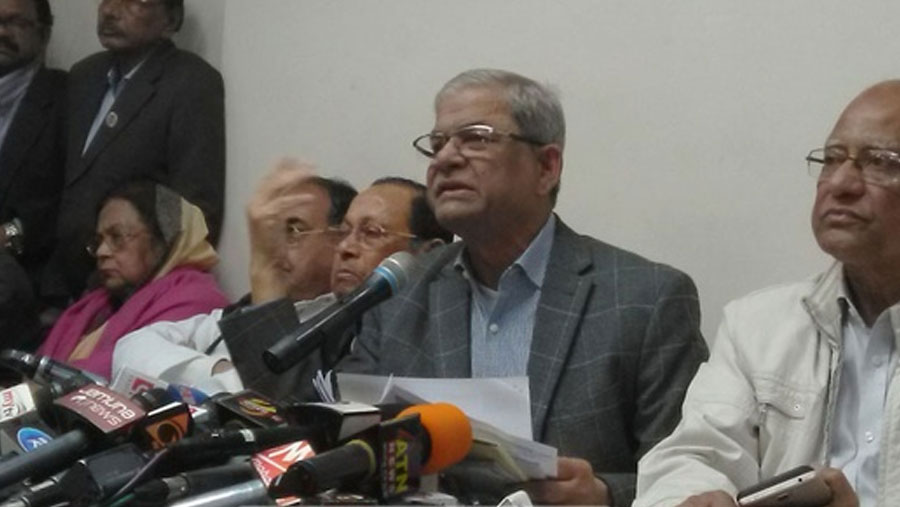 With Fakhrul’s such announcement, the hartal culture in Bangladesh is going to stage a comeback after nearly five years since Apr 5, 2015.

The BNP leader said their hartal his also meant for registering their party’s protest against the ‘massive vote rigging and frauds and stampeding the people’s verdict by force.'

He hoped that the city dwellers will observe the hartal peacefully and thus cooperate with their party to ‘restore’ democracy.

Fakhrul said ambulances, hearse, medicine and food shops will remain out of purview of the hartal.

Fakhrul said the government has destroyed all the democratic institutions with an aim to establish a one-party rule.

“The election process has been destroyed while the Election Commission is being used as a weapon of the government. We think it’s never possible to hold a fair election under Awami League.

Earlier, balloting in the DNCC and DSCC elections ended at 4 p.m. amid ‘low voter turnout’ and reports of sporadic violence and allegations of BNP agents being driven out of polling stations.

BNP Chairperson Begum Khaleda Zia announced the programme as police barred her from coming out of her Gulshan office to join an anti-government rally over the first anniversary of 10th parliamentary election.

The BNP chief stayed her Gulshan office since Apr 4 that year as the blockade programme was on.

Amid the blockade, the party and the 20-party alliance also enforced hartals in different phases.  They called a 45-hour hartal on Mar 30 for the last time demanding ‘restoration’ of democracy and people’s voting right.

She, however, returned to her Gulshan residence from her office signaling that the blockade was withdrawn. The party never withdrew the blockade programme officially.

BNP also never convened hartal or blockade programme after its negative experience during the nearly three-month blockade programme. The party also did not call hartal when Khaleda was sent jail on Feb 8, 2018 as she was convicted in Zia Orphanage trust graft case.

Meanwhile, Awami League has vowed to resist the hartal by deploying its leaders and activists at major locations on Dhaka streets.

Claiming that BNP called an undemocratic hartal to hide their failure in the city polls, Awami League Joint General Secretary Mahbubul Alam Hanif said their (Awami League) activists will be on the streets to avoid any untoward incidents.

Besides, transport owners have decided to operate their vehicles in the capital on Sunday despite BNP calling a daylong hartal on the day.