Govt to continue to use natural gas for economic uplift: PM 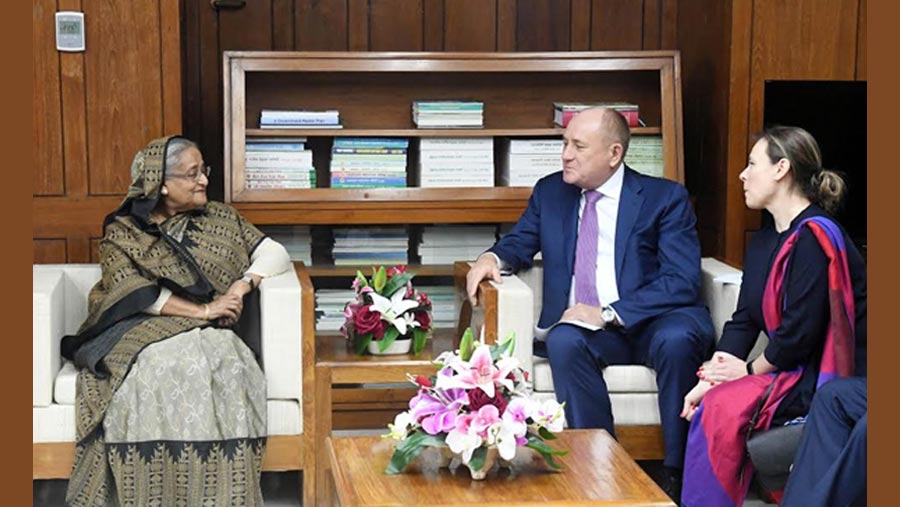 Prime Minister Sheikh Hasina Tuesday (Jan 28) said her government will continue to use the country’s existing natural gas for its economic development and wellbeing of the people. She said this while a delegation of Russian Gazprom gas company paid a courtesy call on her.

“Whatever gas we’ve we want to use it for the country’s economic development and the wellbeing of the people,” PM’s Press Secretary Ihsanul Karim quoted the premier as saying while briefing reporters after the meeting at the PM’s Jatiyo Sangsad office in Dhaka.

Pointing out the cooperation between the two countries, Sheikh Hasina said the government is setting up the country’s first nuclear power plant at Rooppur in Pabna district with the support of Russia.

“Russia always gave a positive support to us,” she said.

Recalling the support of the then Soviet Union in Bangladesh’s Liberation War in 1971, the PM said a number of Russian navy personnel sacrificed their lives while sweeping mines in Chattogram port after independence.

The Gazprom team members told the premier that the company today inked a memorandum of understanding (MoU) with Petrobangla on execution of the project related to exploration, development, production, transportation, refining, marketing of gas and by-products, including LNG as well as development of energy and power infrastructure and personnel.

Under the MoU, they said, the Gazprom will drill three wells soon in Bhola island to increase gas production in Bangladesh.

Terming the agreement as a “significant” one in the field of cooperation between the two friendly countries, the Gazprom delegation members expressed their confidence that this will work smoothly.

This MoU will open up an opportunity for cooperation in the wider areas, they said, adding the Gazprom is known for high quality works in gas sector.

The delegation members said the Gazprom is keen to supply LNG to Bangladesh by 2024. “We’re ready to make cooperation through mutual understanding,” they said.

Founded in 1989, Gazprom is a large Russian company which carries on the business of extraction, production, transport and sale of natural gas. It is the world’s largest gas producer.