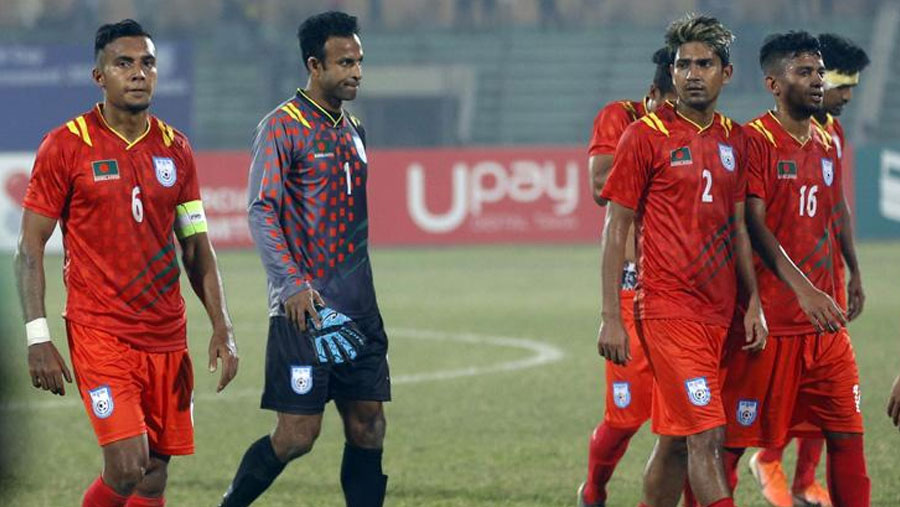 A brilliant hat-trick from forward Nshimirimana Jospin sent Burundi in the final of the six-team Bangabandhu International Gold Cup Football Tournament as they routed the hosts Bangladesh by 3-0 goals in the second semifinal at the Bangabandhu National Stadium in Dhaka on Thursday (Jan 23).

Burundi will play against Palestine in the final match on Saturday (Jan 25) at 4 p.m. at the same venue.

Palestine confirmed their spot for the final after a hard-fought 1-0 win over Seychelles in the first semifinal.

Jospin scored twice just few minutes before the half-time and made his second hat-trick of the ongoing meet scoring third goal in the second half.

The 18-year-old forward scored the opener with a smart tap-in shot from goal mouth melee while defender Rayhan failed to intercept a cross from defender Ngabonziza Blanchard in the 43rd minute (1-0) and doubled the margin with an eye-catching header, off the second successful cross from Blanchard in the stoppage time (46th minute) (2-0).

He netted the third goal and sealed the fate for his side with a left-footer angular shot inside the box in the 79th minute (3-0).

Jospin scored his and the tournament’s first hat-trick scoring three goals against Mauritius in the first group match. He also scored one against Seychelles in the second and last group match. With the feat, the young East African forward reached the summit of the scorer list in the ongoing meet.

The home side made two changes -- Captain Jamal Bhuiyan returned in the squad while defender Rayhan Hasan replaced defender Topu Barman who was suspended conceded a red card (two yellow cards) in the last match against Sri Lanka. Burundi made one change – forward Ciza Thierry came in the place of midfielder Musaga Henry.

Bangladesh got a blow while their forward Motin Miah, who netted a brace against Sri Lanka in the last match, left the field with an injury just few minutes after the starting of the game. Forward Mahbubur Rahman Sufil took his charges.

Bangladesh got a close chance in the 8th but forward Mohammad Ibrahim failed to bury the ball while substitute forward Sufil sent the ball to him inside the box.

After conceding two goals, the hosts came alive and started to play pressing football in the second half. But forward Saad Uddin, defender Riyadul Hasan Rafi and veteran midfielder Mamunul Islam Mamun wasted all the chances.

Sufil missed a chance while his glancing header from the goal mouth melee went on edging the far post while SaadUddin sent the ball to him with a cut-back pass and two long-range shots by Captain Jamal Bhuiyan from nearer the box were smartly denied by Burundi Goalkeeper NdizeyeFales.

Burundi defender Hitimana Hamza and midfielder Nkurunziza Yannick got one yellow card each while Bangladesh’s Mahbubur Rahman Sufil got one.