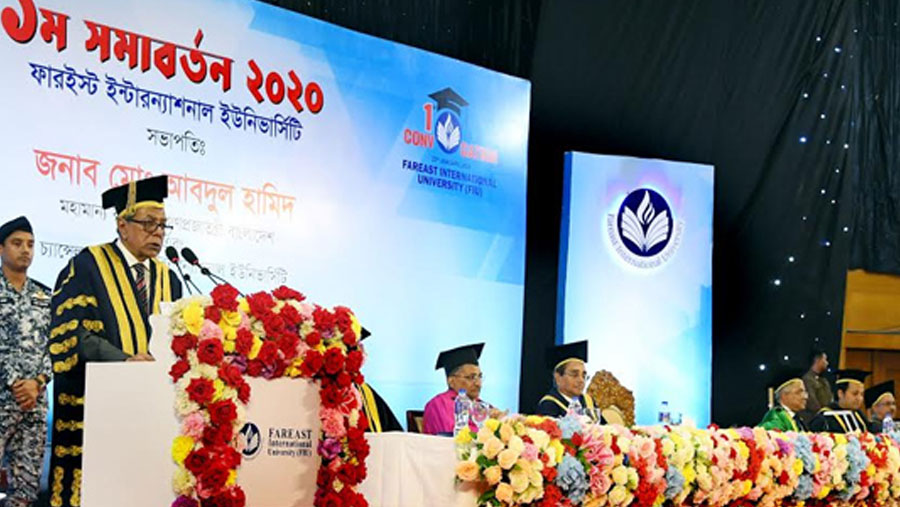 President Md. Abdul Hamid on Thursday (Jan 23) asked students to launch a vigorous campaign against social degradation, including the divorce culture and the trend of foreign culture, as he addressed the first convocation of Fareast International University (FIU).

“You (graduates) must come forward to gear up awareness campaign against all components of social degradation, like divorce culture and ills of foreign culture,” the President told the function at Bangabandhu International Conference Centre (BICC), local media reported.

He added: “Divorce rate in Bangladesh is on rise now . . . But it should not happen in our Bengali culture. And such social ill is spreading due to social degradation and you have to play a pioneering role against cheating in the name of love affairs.”

The President, also chancellor of the university, advised the students not to be fond of taking, what doctors say, health-harming fast foods and soft drinks.

Speaking at the convocation ceremony, President Hamid asked universities to abide by its rules and regulations at all stages, including students’ admission, teachers’ appointment, question-making, selecting academic curriculum and fixing tuition fees, and ensure healthy academic environment on campuses.

“We must bear in mind that the education is not a commodity . . . You (whoever want to run a university) must follow the rules and regulations at all stages,” he opined.

The President also asked the University Grants Commission (UGC) to play an effective as well as strict role to ensure quality of higher education so that the higher studies would not be only for getting certificates.

“If it is necessary the UGC can adopt some specific work-plans discussing with the members of trustee board, guardians and experts, and would be tough to ensure the quality of country’s higher education,” President Hamid suggested.

Chief Justice Syed Mahmud Hossain delivered his speech as the convocation speaker at the convocation ceremony, where a total of 1620 students, including 706 post-graduates, were conferred with degrees on the occasion.

“But many universities of the country are functioning its academic activities in confined commercial venues, a key barrier to the practice of free thinking,” Abdul Hamid observed.

Referring to the ongoing tremendous development of the government led by Prime Minister Sheikh Hasina, the President said Bangladesh has now become a role model of socio-economic development across the world.

He said by upholding the spirit of the 1971 Liberation War and ideals of Father of the Nation Bangabandhu Sheikh Mujibur Rahman, the prime minister declared the ‘Vision -2021’ and ‘Vision 2041’ to build an information technology (IT) based happy and developed Bangladesh.

Congratulating the graduates, the head of the state advised the students not to do any compromise with falsehood and wrongdoing.

The President urged the new graduates to contribute to the overall welfare of the motherland being enriched with knowledge and science, and imbued with the spirit of the Freedom Struggle.