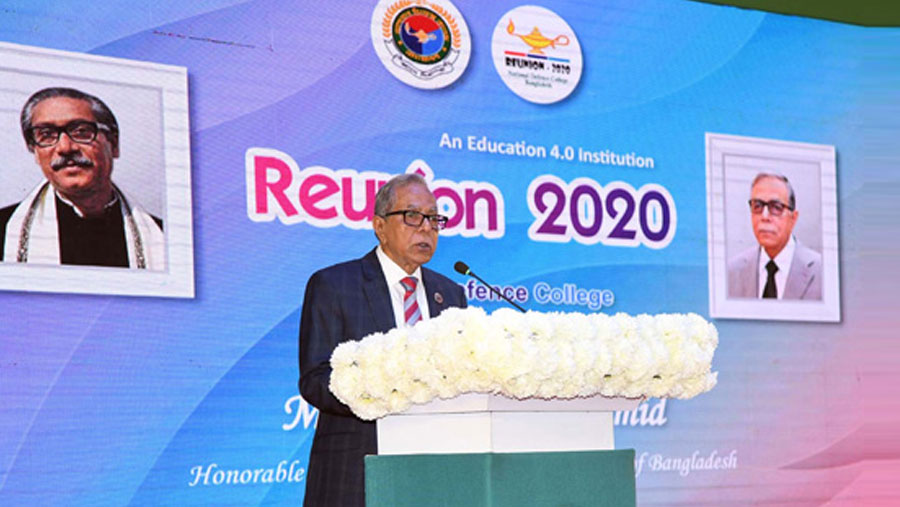 President Md. Abdul Hamid on Saturday (Jan 18) asked the graduates of the National Defense College (NDC) to uphold the image of the armed forces being stick to leadership and imbued with dutifulness and utmost patriotism.

“Keeping deep faith in leadership, mutual respect, professional expertise and discipline are prerequisite to the development of any force . . . Uphold the forces’ image being stick to the leadership,” the President told the “NDC Reunion 2020” at Mirpur Cantonment, in Dhaka in the afternoon, local media reported.

Noting that the incumbent government has undertaken the “Forces Goal – 2030” to give the Armed Forces Division a modern, efficient and vibrant look, he urged the armed forces members to continue their relentless efforts to uphold the image of the forces in their respective works.

The head of the state lauded the overall activities of the armed forces, saying that they, apart from their routine tasks of protecting independence and sovereignty of the country, are also playing very appraisable performance in assisting civil administration in various nation building activities and facing natural calamities.

“Besides, the armed forces members are also enhancing our country’s image in different peacekeeping missions abroad by doing their respective duties with utmost efficiency, optimum discipline, honesty and devotion,” he added.

Referring to the foreign policy “Friendship towards all, malice towards none” adopted by Father of the Nation Bangabandhu Sheikh Mujibur Rahman, the President said Bangladesh is also playing a significant role in establishing world peace along with national development.

President Hamid said the incumbent government led by Prime Minister Sheikh Hasina is working relentlessly to materialize the unfinished tasks of Bangabandhu and ensure the economic emancipation of people.

He called upon members of all units of the armed forces to draw out different programmes to celebrate the Mujib Year, the birth centenary of the Father of the Nation, and Golden Jubilee of Bangladesh Independence in 2021.

The Father of the Nation had cherished a dream to build a strong armed forces division and in line with the vision, his daughter Prime Minister Sheikh Hasina established the National Defense College in 1998, Hamid mentioned.

It imparts training to selected senior military and civil officers from home and abroad on national and international security related fields as well as to impart training to mid-ranking military officers or Bangladesh on war studies.

The NDC is dedicated to be the premier national centre for excellence on leadership, defense, security, strategy and development studies.

The President, also the commander-in-chief of the armed forces welcomed the NDC alumni of different brotherly countries wishing their successful career in days to come.

The President also cut cake on the occasion. He also signed a visitors’ book there.

Hamid, along with his spouse Rashida Khanam, and some other family members, also had the launch and enjoyed the cultural function on the occasion.