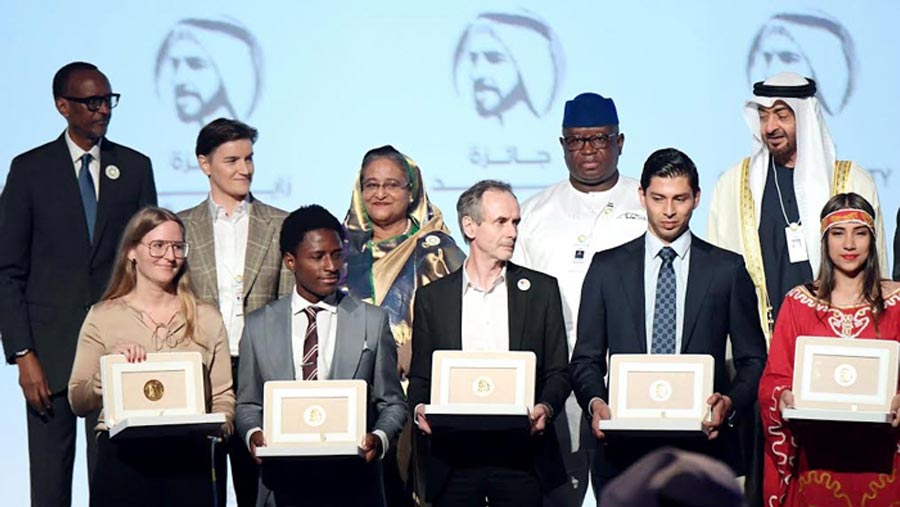 The eight-day ADSW 2020, one of the largest sustainability gatherings in the world from Jan 11-18, brings together a unique fusion of policy makers, industry specialists, technology pioneers and the next generation of sustainability leaders.

This year Zayed Sustainability Prize was given to 10 organisations and institutes of different countries under five categories.

At the function, Sheikh Mohamed bin Zayed bin Sultan Al-Nahyan and Sheikh Hasina along with seven other heads of state and government handed over the prizes to the winners.

The Bangladesh PM handed the prize to the representative of Eutan Tarawa Ieta Junior Secondary School of Kiribati as the school won the prestigious prize under the Global High School category.

Under the four other categories, GLOBHE from Sweden won the prize in health category, while Okuafo Foundation from Ghana in the food, Electricians without Borders from France in the energy and Ceres Imaging from USA in the water category.

The Bangladesh PM exchanged pleasantries with heads of state and government including Zayed bin Sultan Al-Nahyan at the function.

This year’s ADSW includes themes of “Artificial Intelligence, Community and Youth” and features six key pillars: Energy and Climate Change, Water and Food, the Future of Mobility, Space, Biotechnology in Health, and Technology for Good.

The ADSW 2020 features the six pillars coinciding the United Nation Sustainable Development Goals (SDGs) and the UAE Vision 2021 as well.

Established in 2008, the “Zayed Sustainability Prize” is a tribute to the legacy of the founding father of the UAE, the late Sheikh Zayed bin Sultan Al Nahyan; a pioneering champion of global sustainability and humanitarianism.

Over the past 11 years, the Prize has directly and indirectly impacted over 318 million lives and, together with its 76 winners, driven the adoption of sustainable solutions and technologies for people across the globe.

The annual awards ceremony is held each January during Abu Dhabi Sustainability Week.

Sheikh Hasina arrived here last night on a three-day official visit. The premier will join an envoys’ conference at her place of residence this evening to be attended by Bangladesh Ambassadors to Bahrain, Iran, Iraq, Kuwait, Lebanon, Oman, Qatar, Saudi Arab and the UAE.

In the conference, the prime minister will give necessary directives to the Bangladeshi envoys on how they can attract more investment in Bangladesh from the Middle Eastern nations.

In the afternoon, she will attend an interview session on “The Critical Role of Women in Delivering Climate Action” at Hall-11, the ADNEC.

During the visit, the PM will get opportunities to apprise the world leaders of the initiatives taken by Bangladesh in achieving the Sustainable Development Goals (SDGs).

The premier will return home on Tuesday (Jan 14) night.