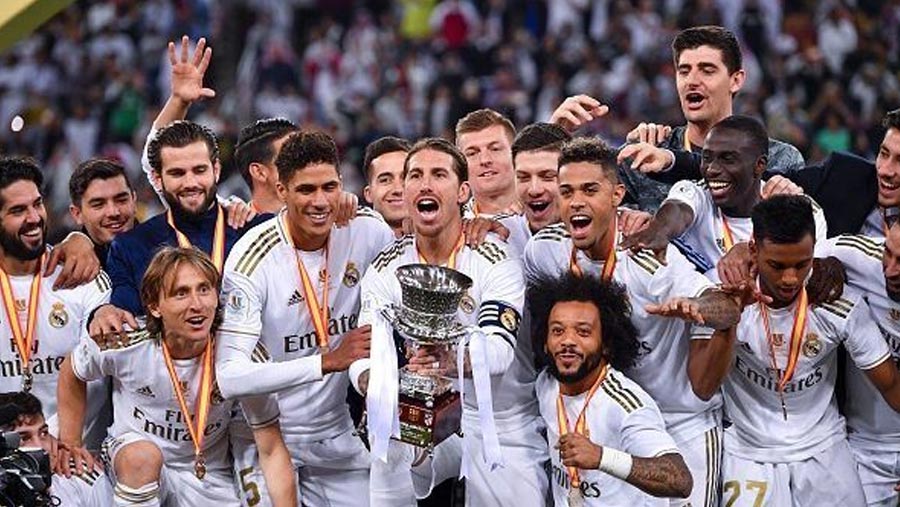 The Real captain sent Jan Oblak the wrong way to secure the trophy after a goalless 120 minutes in Saudi Arabia.

Saul Niguez and Thomas Partey missed their penalties for Atletico.

Real Madrid had ended the game with 10 men after Federico Valverde was sent off in extra time for fouling Alvaro Morata when he was clean through.

The dramatic finale was at odds with what was a largely turgid encounter at the King Abdullah Sports City Stadium in Jeddah.

Joao Felix had the best opportunity of a quiet first half, but he could only shoot wide from the edge of the box after he had been gifted possession by Ramos.

Real were much brighter at the start of the second period, with Serbia striker Luka Jovic driving just wide after he had wriggled past two Atletico defenders on the edge of the area.

Atletico did not manage a shot on target until the 79th minute, Kieran Trippier's searching pass finding Morata, whose volley from the edge of the six-yard box was parried away by Thibaut Courtois.

The game's major flashpoint came with five minutes remaining in extra time when Valverde cynically hacked down Morata just outside the area when he was clean through on goal, sparking a melee involving both sets of players.

In the shootout, Saul saw his spot-kick hit the post before Thomas' effort was saved by Courtois, giving Ramos the chance to secure Real's 11th Spanish Super Cup triumph.

The tournament had a new format this season, with the top two from La Liga and the Copa del Rey finalists playing in a four-team competition rather than the two winners playing each other.

Real, despite finishing third in La Liga, qualified because F. C Barcelona won the league and finished runners-up in the Cup.