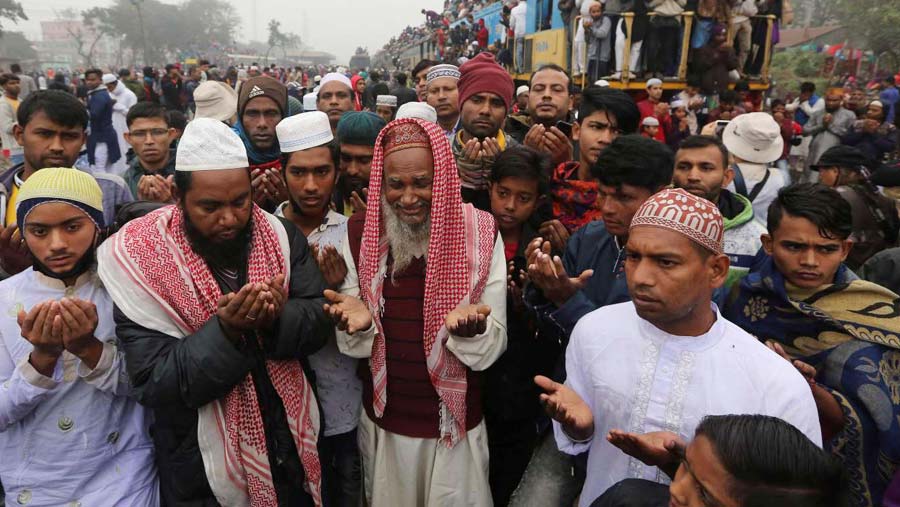 The first phase of this year's Bishwa Ijtema (World Congregation of Muslims) ended today with the Akheri Munajat (final prayers), with thousands of devotees seeking peace, wellbeing and prosperity for the Muslim Ummah. The Biswa Ijtema is one of the largest gatherings of Muslim devotees, held on the banks of the River Turag at Tongi, just north of Dhaka.

The Munajat started around 11:10 a.m. Imam of Kakrail Masjid in Dhaka, Hafez Maulana Mohammad Zobaer, led the Munajat in Bangla and Arabic verses, which ended at 11:47 a.m. He also delivered sermons at the end of the special prayers.

State Minister for Religious Affairs Sheikh Mohammad Abdullah and officials and employees of the Prime Minister’s Office and Ganabhaban took part in the munajat from Ganabhaban.

According to the Ijtema Organizing Committee, more than 1,900 devotees from 61 foreign countries took part in the first phase of Ijtema this year.

Later, Tablighi Senior Mawlanas, Aalmi Tablighi Shura Elders members, Mawlanas of Kakrail and Raibend and other top Ulama e Kerams held a discussion meeting today to fix the date of the next Ijtema to be held in 2021.

The second phase of the Ijtema 2020 is scheduled to begin on Jan 17 at the same venue and it will end on Jan 19. This phase is allocated for the followers of Indian preacher Maulana Saad Kandhalvi.