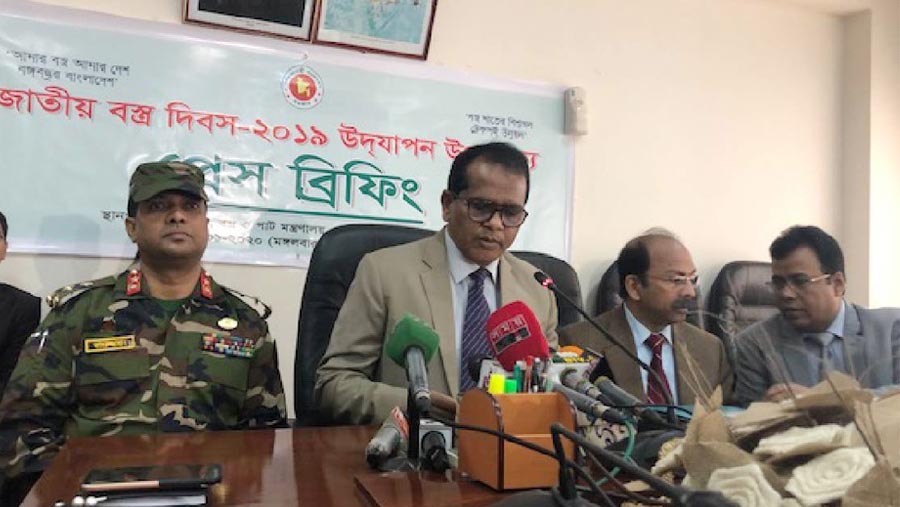 “Initially the textile fair was suppose to be held for three consecutive days but it was decided to suspend the fair on Jan 10 because of the  inauguration ceremony for the countdown to Mujib Borsho, celebrating the birth centenary of Father of the Nation Bangabandhu Sheikh Mujibur Rahman,” he explained.

The secretary said that nine associations or institutions will be awarded in various categories during the fair for boosting exports, promoting excellence and developing the textile sector.

Mentioning that the garment sector is making the highest contribution to the economic development of Bangladesh, Lokman Hossain Mia said, “84.20 percent of export earnings come from this sector which is around 12 percent of the country’s GDP.”

“The expansion of the readymade garment industry had a significant impact on Bangladesh’s society as nearly 5 million people are employed there. Almost 80 percent of them are women and this employment is playing a major role in women’s empowerment,” he said.

According to the secretary, the current government promised to make the textile sector stronger, safer and more competitive in its election manifesto. To implement this commitment, the government has adopted various programmes for the development of the sector.

Commerce Minister Tipu Munshi, State Minister for Labour and Employment Monnujan Sufian and Chairman of the Parliamentary Standing Committee on Textiles and Jute Ministry Mirza Azam will be present at the inauguration ceremony of the two-day textile fair as the special guests.