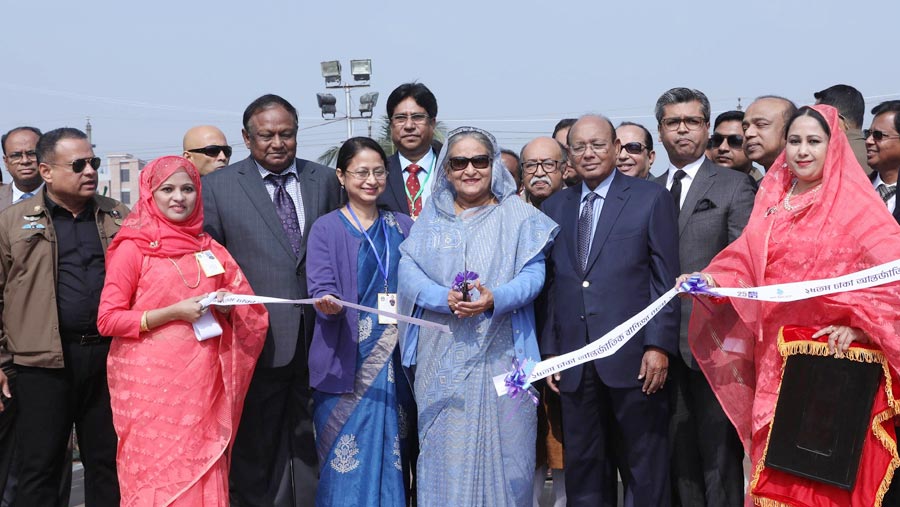 “As a part of export policy, we are declaring “Light Engineering” as the product of 2020 aimed at encouraging the product based export while we are calling for more investment,” she said.

The premier said this while opening the month-long DITF-2020 jointly organised by Commerce Ministry and Export Promotion Bureau at Bangabandhu International Conference Centre (BICC) in Dhaka. She simultaneously stressed the need for taking appropriate measures to strengthen the light engineering sector and help explore its export potential, local media reported.

The PM said that the light engineering products such as bicycle, motorcycle, automobile, auto-parts, electric and electronics, accumulator battery, solar photovoltaic module and toys have the potential of attracting more investment.

She said importance were earlier given on leather and leather goods, jute and jute goods and other products, adding, “But, this year we are giving importance on the light engineering as it has also huge potential of attracting investment.”

The premier opened the trade fair by cutting ribbon to formally begin it on around 26 acres of land at Sher-e-Bangla Nagar in the city.

She later visited different stalls and pavilion including the “Bangabandhu Pavilion” installed at the venue for presenting the life and works of Father of the Nation Bangabandhu Sheikh Mujibur Rahman marking the celebration of Bangabandhu’s birth centenary.

Around 483 stalls and pavilions, including premium, foreign and mini foreign pavilions, have been set up in the fair venue.

Traders from over 21 countries, including India, Bhutan, Pakistan, China, the United States, the United Kingdom, Nepal, Japan, Australia, Germany, Hong Kong and Arab Emirates are taking part in the fair.

Sheikh Hasina stressed the need for stopping dependency on one or two products for export and said, “We are giving special focus on producing much more products considering the demand of the local and neighbouring countries’ market to increase number of export items.”

Describing leather and leather goods, products of shoe industries, light engineering and plastic as the four highly potential sectors for boosting export, the premier said she believed that the commerce ministry’s project ‘Export Competitiveness for Jobs’ will create scope for the sectors to increase export.

She said her government has been attaching special priorities to the four sectors alongside the Information Communication Technology (ICT).

In this perspective, the prime minister put stress on ICT, saying that the ICT sector would much contribute to Bangladesh’s economy if the digital devices are produced largely as the world now depends on technology.

She added: “I believe ICT will be the largest sector for us in the future and we will be able to earn huge foreign currency by exporting its products. So, we have taken measures such as imparting training, setting high tech parks, and creating manpower to give the sector a strong footing.”

She called for more local and foreign investment in jute and jute products describing it as environment friendly as the people are now attaching priority to protecting the environment while the world is now facing the impact of climate change.

In this context, she said, “We want more investment in this sector. If the private sector, local and foreign investors show interest in investing in the sector, we will provide them every necessary support.”

Noting that arrangement of the fair is very important for expanding the trade and businesses of Bangladesh in the world, she said, “We are arranging the trade fair for the 25th time after successful completion of its 24th edition.”

Alongside these sectors, Sheikh Hasina said her government has given priority to the production of agro-processed and handloom items to expand the export basket, adding, “We are giving special attention to the sectors due to having their potential in terms of export.”

The premier also stressed the need for exporting not only the raw materials but also the processed products to increase export of the agro-processed items, frozen lobsters, frozen fish, mango, and potato.

Noting that the number of export oriented products is increasing, Sheikh Hasina said, “We are now exporting 766 products in 202 countries while the export products and service now stands at $ 46.87 billion.”

The PM said Bangladesh has been able to keep its strong position on export sector despite having unfavorable environment in trade sector of the world due to the time-befitting measures taken by her government.

The premier called upon the foreign investors to choose Bangladesh as business abode to enjoy the win-win situation.

Spelling out her government measures taken for the overall development of the country, she said, “Bangladesh has achieved 8.15 percent in GDP growth. Despite having decreasing trend in GDP growth across the globe, Bangladesh is continuously increasing its GDP growth.”

She said Bangladesh is looking for accelerating its present 8.15 percent GDP growth while $1,909 per capita income will increase in the future with coming down the poverty rate to 20.5 percent from 41.

The PM said, “Bangladesh has become main power in the Asia Pacific in terms of economic growth in accordance with the Asian Development Outlook Update-2019.”

She added that the report predicts the rate of economic growth of Bangladesh will be higher in comparison to China and India.

Sheikh Hasina said her government has taken every possible measure in easing doing business and for this reason, taskforce have been formed.

The premier said it is immensely needed to attract investment in the economic sector particularly in industry and productive projects to achieve the Sustainable Development Goals (SDGs).

She said being the gateway of other South Asian nations Bangladesh is connected with 4 billion consumers alongside the country’s own market of 17 crore people.

The premier said due to its geographic advantage Bangladesh could also emerge as bridge between the Oriental and Western countries.

She said her government has been implementing various projects for building infrastructure and development of the roads alongside the water, rail and air ways to develop the communication system for easy transportation of goods.

Steps have been taken for establishing communications among Bangladesh, Bhutan, India and Nepal while the BCIM corridor will link Bangladesh, China, India and Myanmar to expand their trade and businesses, she added.