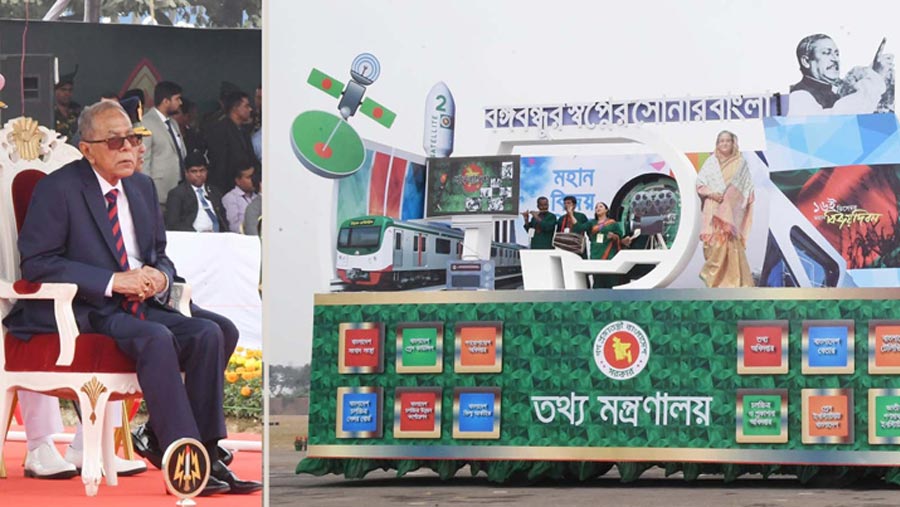 The nation today celebrated the 49th Victory Day, marking the most precious moment when the country was liberated from the clutches of Pakistani occupation forces after a nine-month bloodstained war, with a vow to build a non-communal country.

The publication of a list of Razakars just a day before the victory day brought a new dimension in the observance of the precious moment this year.

Forty-eight years back on Dec 16 in 1971, Bangladesh was born as an independent state under the leadership of Father of Nation Bangabandhu Sheikh Mujibur Rahman, with the supreme sacrifice of the lives of three million people and chastity of nearly half a million women.

The government celebrated the day with different programmes at the national level. The day started with 31 gun salutes.

President Md. Abdul Hamid and Prime Minister Sheikh Hasina paid rich tributes to the martyrs of the Liberation War by placing wreaths at the National Mausoleum at Savar at dawn.

At first, President Abdul Hamid placed wreaths at the altar of the National Memorial with the rise of the sun. He was followed by Prime Minister Sheikh Hasina.

After placing the wreaths, President and Prime Minister stood in solemn silence for some time as a mark of profound respect to the memories of the martyrs of the Great War of Liberation of 1971.

A smartly turned out contingent of Bangladesh Army, Bangladesh Navy and Bangladesh Air Force presented state salute on the occasion when bugles played the last post.

Flanked by senior leaders of the party, Sheikh Hasina, also the Bangladesh Awami League president, laid another wreath at the National Memorial as the party chief.

Cabinet members, advisers to the PM, parliament members, the chiefs of the three services, diplomats and high civil and military officials were also present on the occasion.

They were followed by the freedom fighters and their family members, foreign diplomats, leaders of Awami League and different political and social organisations and people from all walks of life.

PM Sheikh Hasina also paid rich tribute to Father of the Nation Bangabandhu Sheikh Mujibur Rahman by placing wreaths at the portrait of Bangabandhu in front of Bangabandhu Bhaban at the historic Dhanmondi-32 in the city.

Awami League and its associate bodies, different educational institutes and socio-cultural and professional organisations also paid homage to the supreme leader of the War of Liberation by placing garlands at his portrait.

On behalf of the party, Awami League presidium member Col (retd) Muhammad Faruq Khan paid homage to Bangabandhu by placing a wreath at his grave at Tungipara, local media reported.

The day was a public holiday. The national flag was hoisted atop all government, semi-government and private offices as well as offices of autonomous bodies across the country.

Home Minister Asaduzzaman Khan and Inspector General of Police Dr Javed Patwari, among others, were present.

Special prayers were offered in mosques and other places of worship, seeking eternal peace of the souls of the martyrs of Liberation War and peace, progress and prosperity of the country.

Improved diets were served in jails, hospitals, orphanages and vagrant homes across the country.

Destitute children were allowed to visit children’s parks and other recreational centres across the country free of cost.