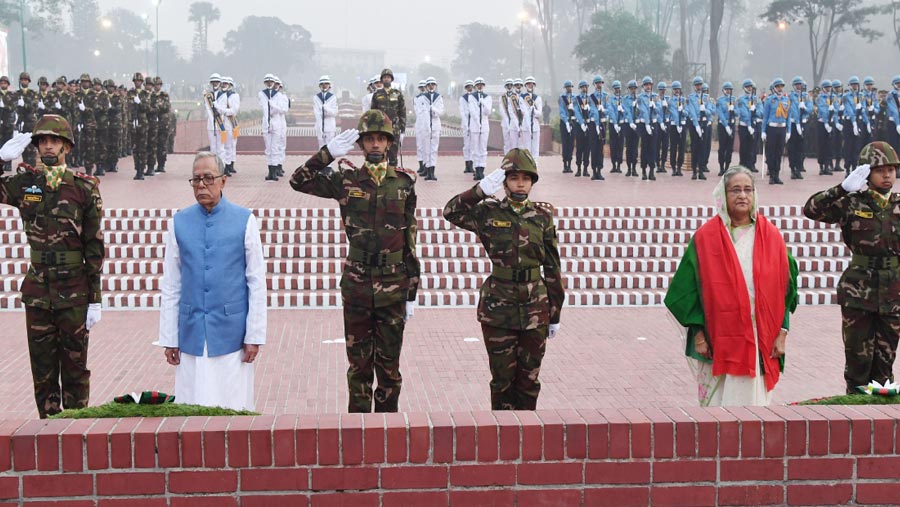 President Md. Abdul Hamid and Prime Minister Sheikh Hasina on Monday (Dec 16) paid tributes to the martyrs of the Liberation War by placing wreaths at the National Memorial marking the 49th Victory Day.

After placing the wreaths, the President and the Prime Minister stood in solemn silence for some time as a mark of profound respect to the memories of the martyrs of the War of Liberation in 1971.

A smartly turned out contingent drawn from Bangladesh Army, Bangladesh Navy and Bangladesh Air Force presented a state salute on the occasion when bugles played the last post.

Flanked by senior leaders of the party, Sheikh Hasina, also the president of the ruling Bangladesh Awami League, laid another wreath at the National Memorial as the party chief.

The nation is celebrating its 49th Victory Day, marking the most precious day when Bangladesh was liberated from Pakistani occupation after a nine-month war through the supreme sacrifice of three million martyrs and the honour of 2,00,000 women.

Bangladesh was born as an independent country on this day under the leadership of Father of the Nation Bangabandhu Sheikh Mujibur Rahman.