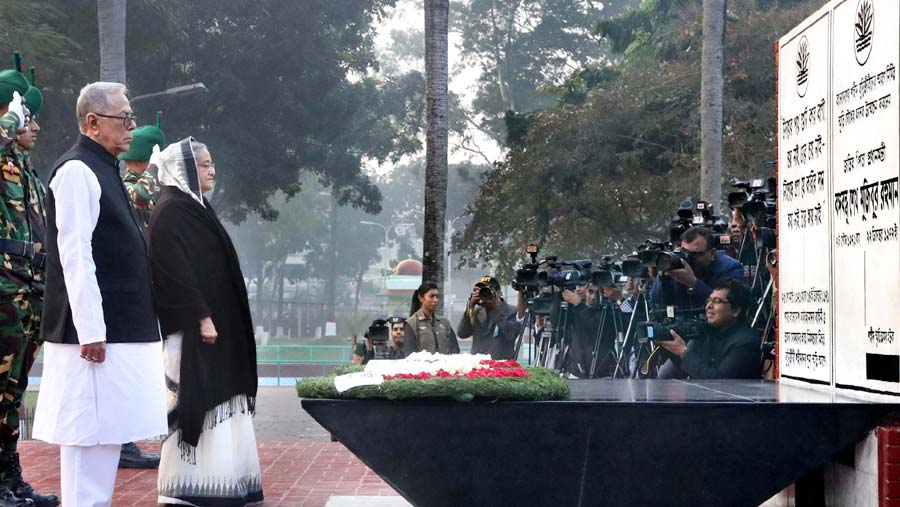 The nation on Saturday (Dec 14) observed the Martyred Intellectuals’ Day paying glowing tributes to the intellectuals, who were brutally killed by the Pakistan occupation forces and their local collaborators at the fag-end of the country’s Liberation War in 1971.

Sensing a humiliating defeat, the retreating Pakistani occupation forces and their local collaborators – Rajakars, Al-Badrs and Al-Shams — dragged off the frontline Bangalee intellectuals and worthy professionals from their houses on Dec 14 and assassinated them with the intention of crippling the newborn nation intellectually.

Marking the day, hundreds of people from all walks of life converged at the Martyred Intellectuals’ Mausoleum in Mirpur and the Rayer Bazar killing ground (Baddhobhumi) to pay their homage to the worthy sons of the soil.

The programmes of the day included raising of black flag and hoisting of the national flag half mast, placing of wreaths at the martyred intellectuals memorials and graveyards, discussions, lighting of candles in memory of the martyrs, morning marches, painting, general knowledge and hand writing competitions and milad and doa mahfils seeking eternal peace of the departed souls of the martyrs.

Earlier, PM Sheikh Hasina received the President on his arrival at Martyred Intellectuals Memorial at 7 am.

The President along with the head of the government stood in solemn silence there for some time as a mark of profound respect to the memories of the martyred intellectuals.

A smartly turned out contingent of Bangladesh Armed Forces gave a state salute while the bugle played the last post at that time.

After placing the wreath, President Hamid exchanged views with the Prime Minister. Abdul Hamid also talked to the war-wounded freedom fighters and family members of the martyred intellectuals who were present there and enquired about their health.

Besides, Awami League paid homage to Father of the Nation Bangabandhu Sheikh Mujibur Rahman by placing wreaths at his portrait on Dhanmondi road 32 in the morning.

At first, PM Sheikh Hasina placed wreath at Bangabandhu’s portrait. Later, she placed another wreath as the president of Awami League.

The JPC opened a special corner at the club on the 1971 Liberation War coinciding with the Martyred Intellectuals Day and Victory Day celebrations.

Dhaka University authorities organised a discussion at the Teacher-Student Centre with Vice Chancellor Prof Md Akhtaruzzaman in the chair.

Islamic Foundation organised Quran Khwani, milad and doa mahfil at Baitul Mukarram National Mosque where special prayers (Munajat) and doa were offered for eternal peace of the departed souls of the martyrs.

People from all walks of life, central leaders of the 14-party alliance, other social-cultural-professional bodies and war-wounded freedom fighters and members of the martyred families placed wreaths at the memorial.