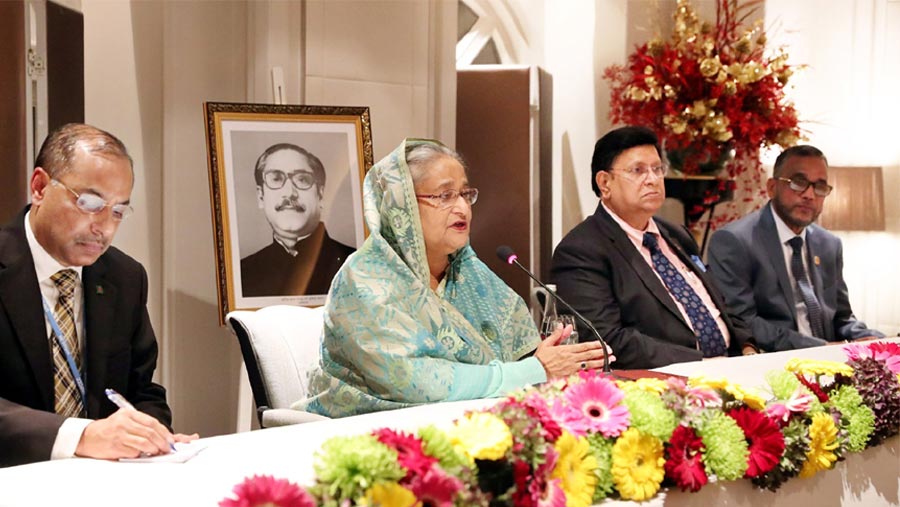 Prime Minister Sheikh Hasina has reaffirmed to continue her government’s ongoing drive against terrorism, militancy, narcotics and corruption, saying that this “sickness” of the society will have to be rooted out.

“Due to the misdeeds of those, who ruled the country for 21 years after the assassination of Bangabandhu in 1975, dirt and garbage were clogged and the erosion of character of the people was made,” she said.

The premier was addressing a reception accorded to her by Bangladesh Embassy in Spain at Hotel Villa Magna in Madrid on Sunday (Dec 1) evening (local time).

Describing herself as a “whole time worker” of the people of Bangladesh, Sheikh Hasina said she is working tirelessly to change the lot of the common people.

“I’m a whole time worker of the people of Bangladesh … I’m working ceaselessly so that the people of both the urban and rural areas get good results of our work,” she said.

Sheikh Hasina also said a section of people want to lead a lavish life by indulging in bribery and corruption and committing terrorism and snatching and they try to say that ‘mui ki honure’ (what we became).

“But we want such mentality among the people doesn’t exist and this illness of the society will have to be eliminated,” she said.

Sheikh Hasina said it is better to have ‘noon-bhat’ (rice with salt) in the honest way than eating ‘biriyani’ in the dishonest path. “We learned it from the Father of the Nation and we’ve to teach it to new generations,” she said.

The PM Bangladesh is marching on all fronts from economy to sports and games. “The people of other countries now respect Bangladesh when they hear its name. But previously they knew Bangladesh as a country of flood, drought, famine and corruption,” she said.

“We’ve launched the drive against terrorism, militancy, narcotics and corruption and the drive will continue to keep up the country’s development spree,” she added.

Sheikh Hasina said Bangladesh became champions in graft for five times in a row during the BNP-Jamaat government. “But that bad name is over now,” she said.

The PM vowed to continue the country’s indomitable progress so that Bangladesh never needs to look behind. “We’re working in a planned way so that the next generations get a beautiful life,” she said.

Pointing out the contributions of the expatriates to Bangladesh’s economy, Sheikh Hasina said her government has taken vatican steps for their welfare.

“The government has given two percent incentive to encourage the expatriates to send remittance in legal channel,” she said.

Referring to the unbridled corruption, terrorism, plundering and money laundering unleashed by the BNP government, the prime minister said the entire country witnessed an anarchic situation at that time.

“The BNP took the country towards destruction at that time through their misdeeds,” she said.

“They’re a master of vote rigging … now they’re giving sermon on the issue,” she said.

She said the country’s GDP rate increased to 8.13 percent and poverty rate was brought down to 21 percent from 41 percent. “We are working to reach electricity to every place and we want not a single house to remain in darkness,” she said.

“We’ll celebrate the birth centenary of Bangabandhu in 2020 and golden jubilee of independence in 2021 by keeping up this trend of development,” she added.

The PM arrived in Madrid on Sunday afternoon for a three-day official visit to Spain to join the “Heads of State and Government Summit” of the 25th Annual Conference of Parties (COP25).