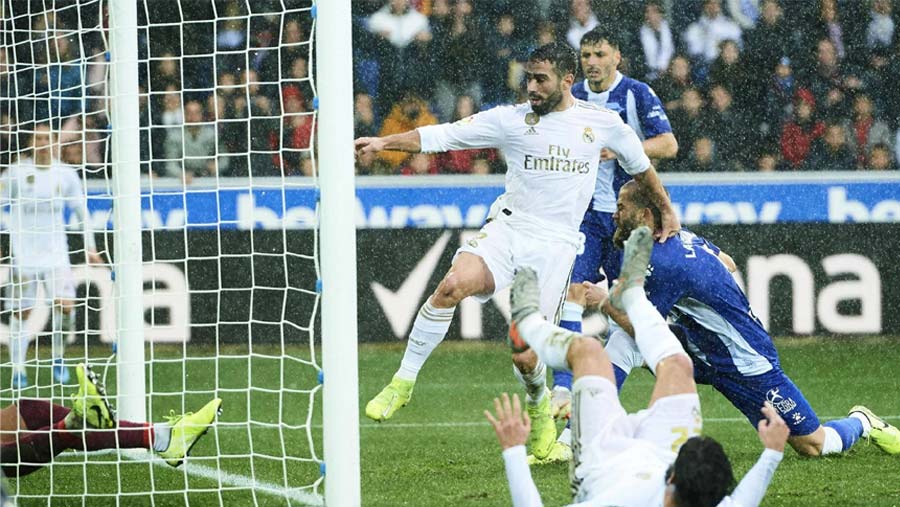 Withstanding the rain and cold, Real Madrid pulled off a hard-fought victory against Alaves to put pressure on F. C. Barcelona at the top of the Spanish league on Saturday (Nov 30).

The result gave Madrid a three-point advantage over Barca. They both have a game in hand because their Clasico from October was postponed until Dec 18 because of a separatist rally in the Catalan capital.

It was the third straight league win for Madrid, which is unbeaten in eight matches in all competitions.

Ramos scored with a header off a set-piece taken by Toni Kroos in the 52nd minute, then committed the foul leading to a penalty kick for Alaves, which was converted by Lucas Perez in the 65th.

Ramos was shown a yellow card for his foul, an elbow to the face of Alaves forward Joselu.

Perez has eight goals in his last nine matches.

Carvajal netted the winner from close range five minutes later off the rebound of a header by Francisco “Isco” Alarcon. Alaves goalkeeper Fernando Pacheco made an initial save against Isco’s header before the ball went off the woodwork and ricocheted back toward Carvajal in front of the goal.

Zidane opted to start against Alaves without Thibaut Courtois, who made a mistake in the first PSG goal on Tuesday. He was replaced by Alphonse Areola, whose key second-half saves secured three points for Madrid under heavy rain at the Mendizorroza Stadium.

Madrid was also without Eden Hazard, who picked up a bruise in the match against PSG. Isco started in his place, alongside Gareth Bale and Karim Benzema up front.

Bale, who was on the bench for most of the match against PSG, put in a low-key performance.