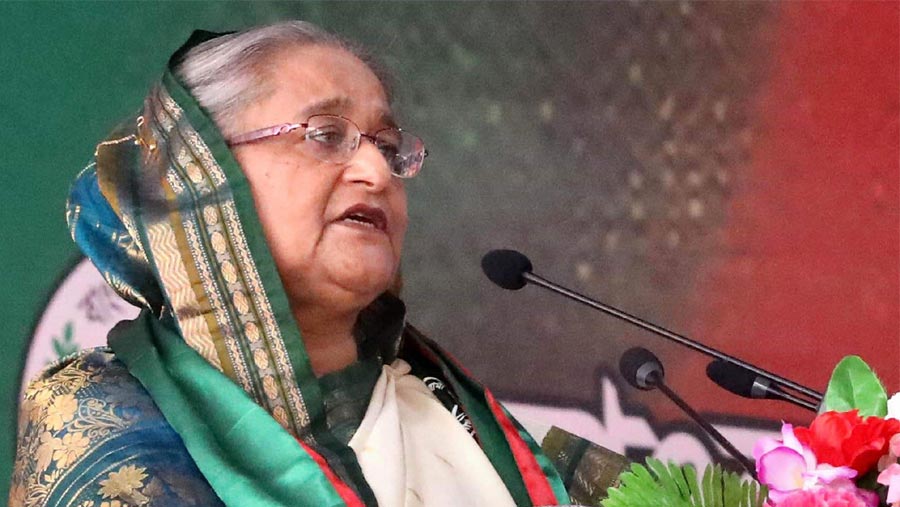 Prime Minister Sheikh Hasina on Saturday (Nov 16) said onion-loaded cargo planes were expected to reach the country in one or two days to contain its abnormal price hike while the government planned as well to review what actually caused the situation.

“I expect the cargo planes carrying onions to reach the country by tomorrow or the day after tomorrow,” she said while opening the third national council of Awami Swechchhasebak League at Suhrawardy Udyan in Dhaka, local media reported.

The premier said a situation was created with onion in the country “but I don’t know why its price is jumping abnormally”.

She, however, said the price of this essential cooking ingredient spiraled in many other countries but its abnormal price hike in Bangladesh required to be examined.

“So we’ve to see whether anybody is involved in any plot (regarding the opinion),” the premier said.

The PM was addressing as the chief guest the inaugural function of the council of the Awami Swechchhasebak League, the ruling Bangladesh Awami League’s volunteer wing after opening the event by hoisting the national flag and releasing pigeons and balloons.

Sheikh Hasina, who also chairs the Bangladesh Awami League, regretted that whatever advancement the country made and what extent the people stay well “ill efforts are made to create issues one after another with an intention to mislead people”.

The premier said the onion price was now also high in countries from where the government was importing this essential commodity.

“We have started importing onion by cargo planes so that the problem doesn’t exist,” she said.

The PM said being a perishable item onion could not be preserved for a long time which could be one of the causes for its price spiral.

“So, anybody who wants to earn some money by hoarding and increasing the price of onion, he or she will have to think that it’s a perishable commodity,” she said.

Mentioning that efforts are being made to dry the rotten onion, Sheikh Hasina said: “We’ve to see why and who are behind this (the price hike).”

Pointing out that the price of onion in India is also high, the premier said the people have to buy one kilo onion at Rupees 100 or more there.

“The price in only one state of India is less as it is not allowing its onion to go to other states. The overall price is high in India,” she said.

Vowing again that the ongoing drive against graft, terrorism and narcotics will continue, Sheikh Hasina said peace and security will have to be ensured in the life of the people of Bangladesh.

“The country’s development is possible if a peaceful environment exists,” she said, posing a question why money will be made by committing corruption and stealing?

The PM said the people of the country will no more tolerate leading luxurious life by anybody through earning money in a dishonest way like graft, extortion and terrorism.

“Eating ‘noon-bhat’ (rice with salt) in the honest way is good and a matter of honour and dignity than having biriyani (rich food) through the illegally- earned money,” she said.

Referring to unbridled terrorism, corruption and money laundering unleashed by the BNP-Jamaat nexus, the prime minister urged the countrymen to remain alert against the return to power of those who were involved in such crimes.

She said the BNP-Jamaat elements patronized the killers and entertained injustice and made war criminals and Bangabandhu’s killers ministers and MPs by rigging votes.

“It’s BNP who staged the voterless election on Feb 15 in 1996, while terrorism, corruption and grenade and bomb attacks frequently took place in the country during its five-year misrule,” she said.

The Awami League president said BNP leaders from Ziaur Rahman to Khaleda Zia had started political killings in the country and their this habit will never go.

The PM said the Awami League and its associate organizations have many responsibilities for the country and the people as Father of the Nation Bangabandhu Sheikh Mujibur Rahman had worked for the welfare of the people. “We’ll have think about it this way,” she said.

Sheikh Hasina added: “If anybody pursues politics with this thinking, then that politics will never die.”

“But they could not succeed as the Awami League is deeply rooted on the soil of Bangladesh,” she said.

Spelling out the country’s impressive development on all fronts, the prime minister said the country is advancing as the Awami League is implementing a time-befitting policy and economy.

“We’ve placed a budget seven times higher and due to this development the country is moving ahead fast. But there are some people who used to move by selling poverty do not feel comfortable in it and they always try to impede development and conduct propaganda against the country,” she said.

In this connection, Sheikh Hasina urged all not to be misled by the propaganda of this vested quarter. “You’ll have to disseminate the message of services the government is providing for the people,” she said.

The PM said her government has been able to create confidence among the people as massive development took place in the last one decade. “Now we’ll have to keep up the pace of development,” she said.

“I hope that they will continue to serve the people and discharge their responsibilities for the main party and they’ll infuse mentality of serving people into the children, juveniles and youths,” she said.