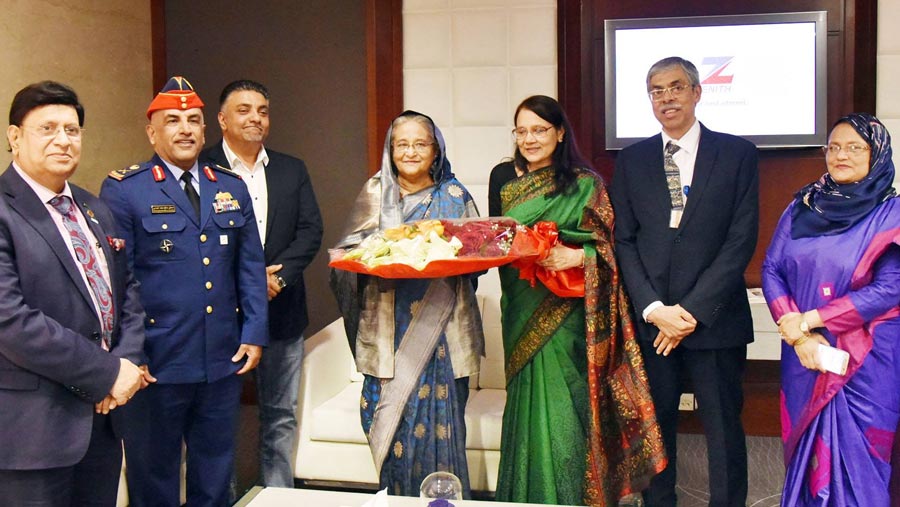 The premier is visiting the UAE at the invitation of its ruler Sheikh Mohammad Bin Rashed al Maktoum.

An Emirates flight carrying the PM and her entourage members landed at Dubai International Airport. Bangladesh Ambassador to the UAE Mohammad Imran received the premier at the airport.

After the reception at the airport, a ceremonial motorcade escorted the premier to Shangri-La Hotel in Abu Dhabi, where she will be staying during her visit to the UAE, local media reported.

On Nov 17, Sheikh Hasina will attend the opening ceremony of the Dubai Air Show 2019, one of the largest and most successful air shows in the world and the biggest aerospace event in the Middle East, Asia and Africa, at Dubai World Central (Dubai Al Maktoum Airport) in the morning.

She will later enjoy the flying display in the afternoon at Dubai World Central.

As many as 87,000 participants and 1,300 exhibitors from all over the world are expected to gather at Dubai World Central – Dubai’s airport of the future.

The biennial air show will once again take over the skies of Dubai on Nov 17-21, and is expected to surpass the feats of Dubai Airshow 2017, which concluded with an order book worth more than $113.8 billion and welcomed 79,380 attendees and 1,200 exhibitors from 63 countries.

Concluding the four-day visit to the UAE, the premier will return home on Nov 19.

“During the visit of the honorable prime minister, three instruments – two bilateral cooperation documents and a protocol – are expected to be signed between Bangladesh and the UAE,” Foreign Minister Dr AK Abdul Momen told a news briefing on Thursday.

The foreign minister said the prime minister will inaugurate the Election Commission’s programme to start registering Bangladeshis working in the UAE on the voter list and distributing smart NID cards among them on November 18 at the Bangladesh Embassy in Abu Dhabi.

During the visit, the prime minister is also expected to meet big UAE investor groups and businesspeople, Momen said.

“It is expected that the visit will have a positive impact on UAE investment in different sectors of Bangladesh and will help boost cooperation between the investment authorities,” he added.