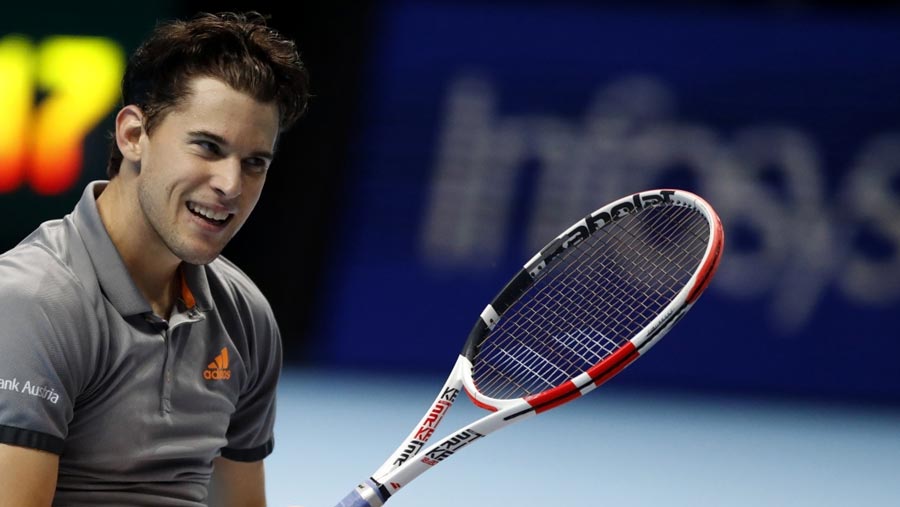 Dominic Thiem booked a semi-final spot at the ATP Finals with a stunning victory over Novak Djokovic in the standout match of the tournament so far on Tuesday (Nov 12).

The world number five ripped winners all over the 02 Arena's blue court to rock five-time champion Djokovic on his heels for a 6-7(5) 6-3 7-6(5) victory and move top of the group.

Djokovic played a full part in an exhilarating contest but could not quite match the firepower of the 26-year-old who has now beaten him in four of their last five meetings.

The Serb seemed to have weathered the storm as he fought back from a break down in the decider and came within milimetres of a match point when Thiem served at 4-5 30-30 and won a Hawkeye challenge after his rasping forehand was shown to have clipped a line.

Thiem then broke the Djokovic serve at 5-5 but could not serve it out and was dragged into a tiebreak.

Djokovic led 4-1 but Thiem would not be denied and reeled off five points in a row to give himself two match points.

Thiem thought he had served an ace at 6-4 but it was called out and this time his Hawkeye challenge was unsuccessful.

However, the Austrian made sure at the second time of asking as Djokovic netted after close to three hours on court.

Whatever happens to Thiem against already-eliminated Italian Matteo Berrettini on Thursday, he will progress from the Bjorn Borg group, while Djokovic now faces Roger Federer to decide who will join the Austrian in the weekend's semi-finals.