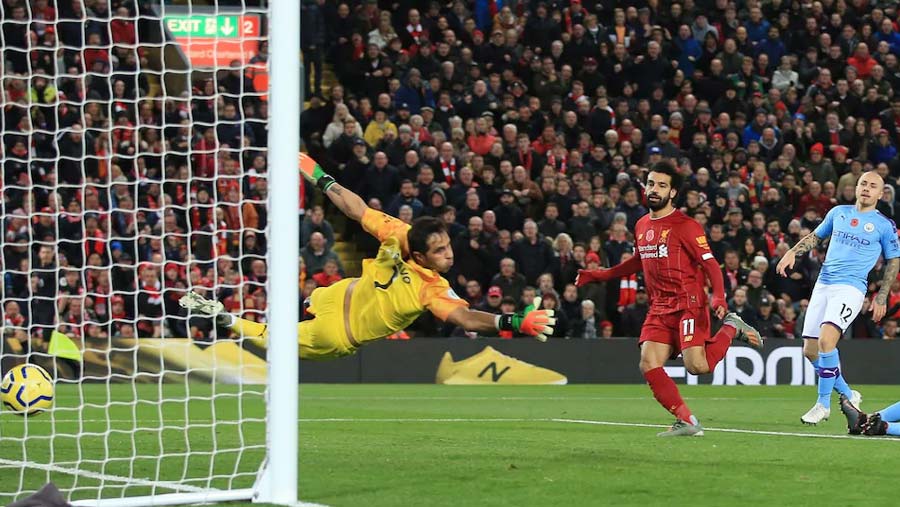 Liverpool are nine points clear of Manchester City at the top of the Premier League after beating their title rivals 3-1 at Anfield on Sunday (Nov 10).

Leaders Liverpool took an important step towards the Premier League title with a 3-1 win at home to Manchester City on Sunday (Nov 10).

The win gives Liverpool 34 points from their first 12 games of the campaign and lifts them nine points ahead of Manchester City, who drop to fourth in the table, with Leicester and Chelsea moving into second and third places with 26 points each.

Man City dominated the opening minutes of the game only to find themselves 0-2 down after 13 minutes thanks to a stunning Fabinho strike in the sixth minute and a Mohamed Salah header seven minutes later.

Pep Guardiola's side was especially unhappy about Fabinho's goal which came directly after they had a penalty appeal turned down claiming Liverpool defender Trent Alexander Arnold handled in his own area.

While there is no doubt the ball struck the defender's hand, the VAR ruled the incident "did not meet the conditions for it to be considered deliberate handball."

Sadio Mane scored Liverpool's third goal in the 51st minute as he stooped to head the ball past Claudio Bravo in the visitors' goal after a Jordan Henderson cross.

Bernardo Silva gave City a glimmer of hope in the 78th minute, but despite causing the fans in Anfield some nervous moments in the last 10 minutes it wasn't City's day.

Second-half goals from Jamie Vardy and James Madison continued Leicester City's impressive form with a 2-0 win at home to Arsenal to take Brenden Rodgers's side up to second.

Arsenal never really looked like getting anything from the game and the defeat piles the pressure on coach Unai Emery who appealed for "calm" when speaking to the press after the final whistle.

Tammy Abraham scored his 10th Premier League goal of the season and Christian Pulisic continued with his excellent form by scoring his fifth goal in three games as Chelsea beat Crystal Palace 2-0 to claim their sixth successive Premier League win.

Sheffield United's impressive season continued and the newly-promoted side was still unbeaten away from home after James Baldock's 78th-minute goal gave them a 1-1 draw away to Tottenham.

The draw was no less than Sheffield United deserved as Tottenham produced another disappointing show, which head coach Mauricio Pochettino after the game asked for time to "rebuild" his squad.

A reprieved Son Heung-min put Spurs ahead and Sheffield was unlucky not to equalize earlier than Baldock's goal after John Lundstram saw a goal ruled out by VAR because his big tie was deemed to be offside.

Manchester United followed their midweek Europa League win with a 3-1 triumph at home to Brighton on Sunday.

Andres Pereira and an own goal from Davy Propper put United 2-0 up after just 19 minutes and although Lewis Dunk headed Brighton back into the game in the 64th minute, Marcos Rashford restored United's two-goal advantage just a minute later.

Wolves claimed the Midlands derby with a 2-1 win at home to Aston Villa thanks to goals from Ruben da Silva and Raul Jimenez before Trezeguet scored an injury-time consolation goal for the visitors.

West Ham United slipped to 16th in the table after a wretched 3-0 defeat away to Burnley. Ashley Barnes and Chris Wood put Burnley 2-0 up before halftime and Roberto's own goal 10 minutes into the second half sealed a poor afternoon for the visitors who have now gone six games without a win.

Ciaran Clarke scored the winner as Newcastle continued their recovery with a fightback to claim a 2-1 win at home to Bournemouth after Harry Wilson put the visitors ahead in the 14th minute.

Everton claimed three valuable points away to Southampton after goals from Tom Davis and Richarlison gave them a 2-1 win at St Mary's, while Watford had their first triumph of the season on Friday night with a 2-0 victory away to Norwich, which leapfrogged Quique Sanchez Flores' men off the bottom of the table and up to 18th.