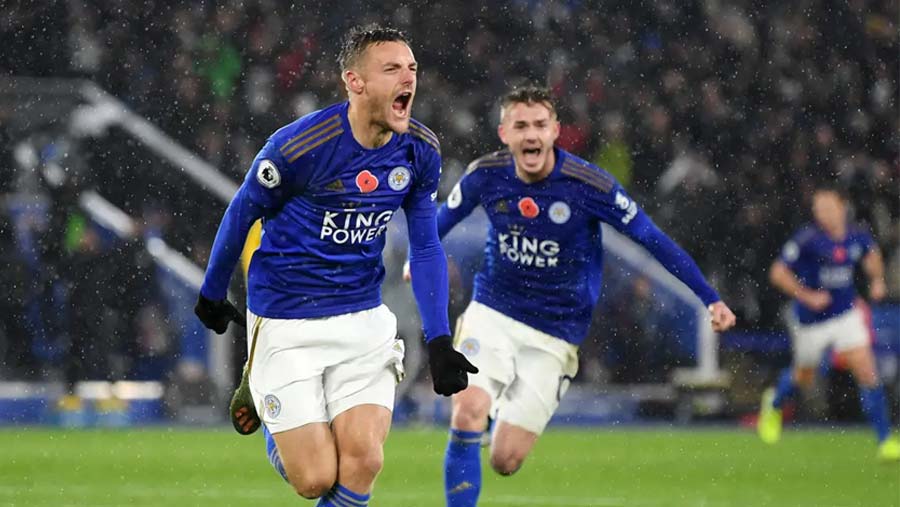 Leicester City moved up to second in the Premier League as second-half goals from Jamie Vardy, and James Maddison secured a 2-0 win against Arsenal on Saturday (Nov 9).

Vardy and Maddison both scored in the second half at King Power Stadium as Leicester piled yet more pressure on Arsenal manager Unai Emery.

Arsenal have now gone four games without a win after their defeat to a Leicester side that is looking every bit as effective as their 2016 title-winning squad.

Leicester boss Brendan Rodgers was quick to praise Vardy, the Premier League's top scorer with 11 goals so far this campaign.

"He is up there with the very, very top strikers in European football with what he brings to a team..." he said.

Elsewhere, Chris Wood celebrated his new contract with a goal in Burnley's 3-0 win over West Ham.

Wood had an earlier goal disallowed by the VAR.

Burnley, who had lost their last three matches, went ahead in the 11th minute when Dwight McNeil swung in a deep corner, James Tarkowski snuck round the back and headed to Ashley Barnes who poked home.

Wood then scored for the Clarets before Wolves striker Jimenez put the ball in his own net.

Elsewhere, Chelsea have notched a sixth successive Premier League win as they beat Crystal Palace 2-0 to jump to third.

Chelsea laboured in the first half against a rugged Palace, but Tammy Abraham put them ahead after the break with his 10th goal of the season before Christian Pulisic sealed victory with his fifth goal in three league games.

The return of midfield shield N'Golo Kante helped Chelsea keep their third clean sheet of the season and move above champions Manchester City.

Leaders Liverpool take on Man City at Anfield on Monday in the biggest game of the season so far.

Spurs were given a fortuitous lead after halftime by Son Heung-min, but George Baldock's equaliser earned Sheffield Utd a 1-1 and extended their unbeaten run to five league games.

It was no more than United deserved after they had a David McGoldrick goal ruled out for a fractional offside after a VAR check that took almost four minutes to complete.

Sheffield United sit in the top six while Tottenham are without a league win since September.

Newcastle United claimed a second successive win as they beat Bournemouth 2-1 to climb into mid-table.