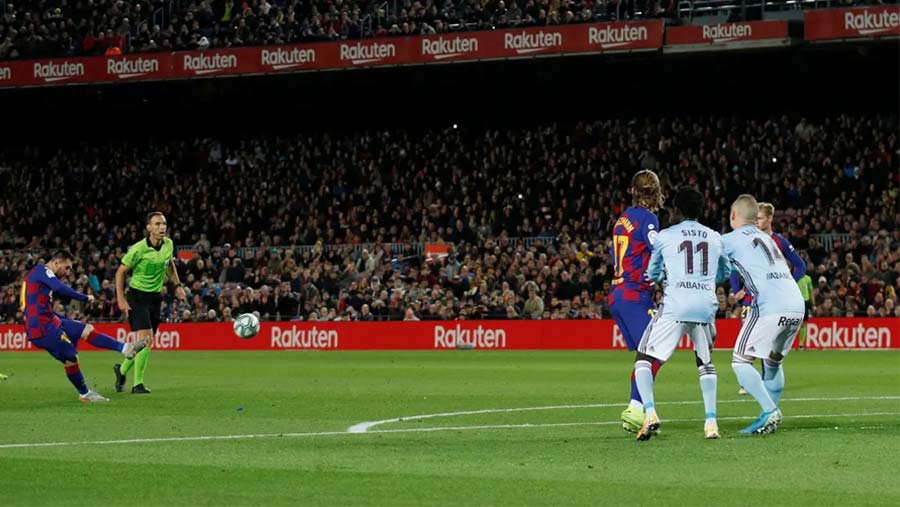 F. C. Barcelona put a rough week behind them with an emphatic victory over Celta Vigo on Saturday (Nov 9), Lionel Messi scoring a sumptuous hat trick to send his side back to the top of La Liga.

Lucas Olaza equalised for the visitors with an excellent free-kick, but Messi put the hosts back in front with a similar attempt four minutes later.

Messi stepped up again after half-time, before Sergio Busquets added a fourth.

Real Madrid had earlier defeated Eibar 4-0 to move first in the table, but this result sees Barcelona reclaim top spot on goal difference.

Celta Vigo, playing their first game under new manager Oscar Garcia, started brightly as they looked to test a Barcelona side condemned to a shock 3-1 defeat by Levante last weekend.

Their early hard work was undone by Aidoo's handball, and there was nothing goalkeeper Rubén Blanco could do as Messi's inch-perfect free-kicks either side of the interval wrestled the game away from the visitors.

The match was already over as a contest when Busquets swept home his side's fourth with five minutes remaining.

It leaves Barcelona and Real Madrid tied on 25 points as the El Clasico showdown on Dec 18 draws near.