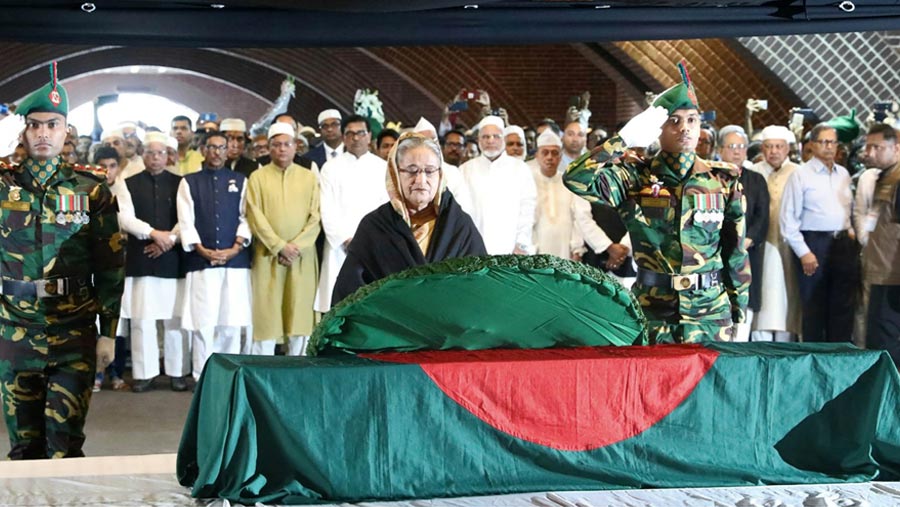 Prime Minister Sheikh Hasina paid rich tributes to valiant freedom fighter and parliament member Mayeen Uddin Khan Badal by placing wreaths on his coffin at South Plaza of Jatiyo Sangsad Bhaban on Saturday (Nov 9) morning. After placing the wreath, the PM stood in solemn silence for some time as a mark of profound respect to the memory of Badal, a lawmaker of a faction of Jatiyo Samajtantrik Dal (JSD).

Flanked by senior leaders and parliament members of the party, Sheikh Hasina, also the Bangladesh Awami League president, laid another wreath on the coffin on behalf of the party.

On behalf of President Md. Abdul Hamid, his military secretary placed a wreath on the coffin of Badal.

Earlier, the first Namaz-e-Janaza of Badal was held at the South Plaza of the Jatiyo Sangsad Bhaban.

Jatiyo Samajtantrik Dal politician, and the incumbent Member of Parliament from Chattogram-8, Mayeen Uddin Khan Badal passed away in India on Thursday (Nov 7) morning. He was 67.

He breathed his last while undergoing treatment at Narayana Institute of Cardiac Sciences Bangalore, India.