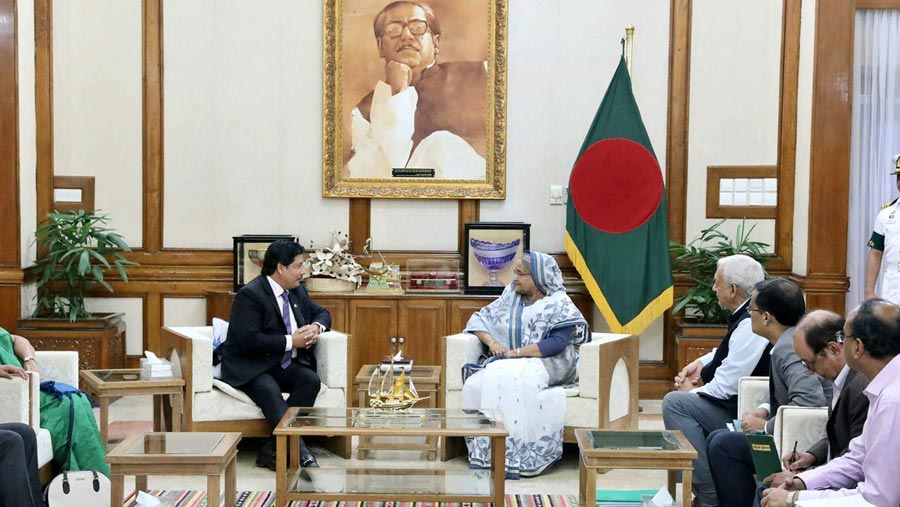 “Meghalaya entrepreneurs can invest in Bangladesh, particularly in neighbouring Sylhet region, as a special economic zone (SEZ) is being established in Sunamganj,” PM’s Press Secretary Ihsanul Karim quoted the premier as saying while briefing reporters after the meeting at Ganabhaban in the evening.

Sheikh Hasina said the SEZ is being set up in Sunamganj on 2,000 acres of land.

Putting emphasis on further strengthening connectivity between Bangladesh and India, the prime minister said Bangladesh can use waterways to import boulder from Meghalaya as the use of river route is cost effective.

In this connection, Sheikh Hasina said navigability of the rivers will have to be increased through dredging for preserving more water and smooth movement of vessels.

The premier said the rail and road routes between the two countries which were closed down after the 1965 India-Pakistan war are being reopened.

“It will boost trade and commerce alongside strengthening the connectivity between the two neighbors,” she said.

Conrad Sangma said Meghalaya can be a great partner of Bangladesh for development as the Indian northeastern state has enough raw materials including limestone, cement clinkers, coal and boulders.

He emphasized cooperation between Meghalaya and Bangladesh in the fields of agriculture, energy and culture.

The Meghalaya chief minister said Indian Prime Minister Narendra Modi wants the cooperation between Bangladesh and the northeastern states of India to be strengthened further.

“Our door is open for cooperation,” Sangma said.

He said Meghalaya wants to use Chattogram seaport for goods movement.