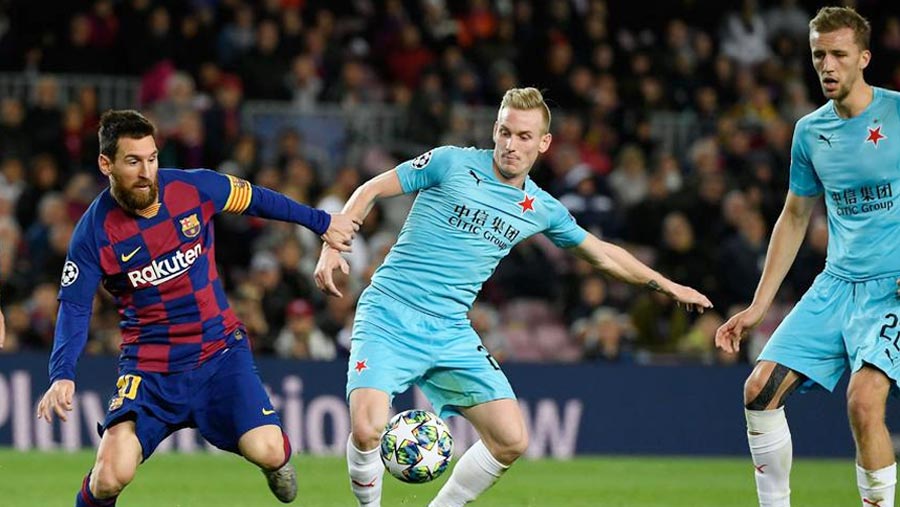 F.C. Barcelona failed to score for the first time in 46 home games as they were held to a draw by Slavia Prague.

Lionel Messi, who did not score or provide an assist for the first time in a home Champions League group game since 2012, struck the bar and had the best of Barca's six shots on target. His fierce left-footed strike was well saved by Ondrej Kolar in the first half.

Barca remain top of Champions League Group F, while the visitors are bottom.

Ernesto Valverde's side have eight points from four games, while Borussia Dortmund are in second spot with seven points after beating Inter Milan in a thriller at the Westfalenstadion.

The visitors started brightly but the exciting Nigerian striker Peter Olayinka was unable to latch onto Petr Sevcik's square pass in the fourth minute.

Barca were lacklustre early on and their most potent attacking threat was full-back Nelson Semedo, who twice broke clear down the right, before wasting the final ball.

Messi then grew into the game, showing glimpses of his brilliance without being able to strike the decisive blow. The Barca talisman brilliantly turned Michal Frydrych in his own half before bursting clear and firing a shot at goal, but his effort struck the crossbar. Moments later, Kolar was on hand to keep out a Gerard Pique header with another acrobatic save.

Both sides had goals disallowed for offside after the video assistant referee (VAR) intervened, as first Jan Boril's close-range finish was ruled out, and then Arturo Vidal's finish was chalked off after Messi was penalised in the build-up.

Winger Ansu Fati, 17, was introduced off the bench in the second half and he quickly fed Messi with the outside of his right foot, but the Argentine could only direct his shot straight at the excellent Kolar from close range.

Barcelona lost 3-1 to Levante in La Liga on Saturday and coach Ernesto Valverde said: "We haven't been convincing, either on Saturday or today, and we know there is a lot of pressure now on the team. We have to respond."

The La Liga champions face Borussia Dortmund at home in their next Champions League game on Nov 27 (20:00 GMT), while Slavia host Inter Milan at the same time.

Elsewhere in Group F, Achraf Hakimi scored twice as Borussia Dortmund came back from two goals down to beat Inter Milan 3-2 in the Champions League on Tuesday.

Dortmund went into the break 2-0 down but charged back into the game in the second half to take second place in Group F.

Goals from Lautaro Martnez and Matas Vecino had given Inter the lead in a first half, but Hakimi kick-started Dortmund's comeback in the 51st minute, darting in from a wide position to knock in a cross by Mario Gotze.

Dortmund pulled level when Paco Alccer came off the bench and used his first touch to intercept a throw-in and set up Julian Brandt to score.

More pace from Hakimi bagged the third. The 21-year-old full-back, on loan from Real Madrid, received a smart through-ball from Jadon Sancho and finished calmly for his fourth Champions League goal in as many games.

Napoli missed their chance to book their place in the knockout stages of the Champions League as they were held to a 1-1 draw at home by Red Bull Salzburg on Tuesday.

Teenager Erling Haaland put Salzburg ahead from the penalty spot in the 11th minute after Kalidou Koulibaly had tripped Hee-Chang Hwang.

Hirving Lozano scored his first home goal for Napoli to level the game shortly before half-time, while the Italian side also hit the woodwork twice.

Valencia breathed life into their hopes of qualifying for the last 16 of the Champions League with a stunning second-half turnaround to beat Lille 4-1 at home on Tuesday.

Nigerian forward Victor Osimhen gave the French side a deserved lead in the 25th minute, but Valencia drew level in the 65th minute with an ice-cool Panenka penalty from captain Dani Parejo.

The home side went ahead in the 82nd minute with an own goal from Lille defender Adama Soumaoro, who diverted Jose Gaya's low cross into the net.

The victory puts the Spaniards third in Group H on seven points, level on points with leaders Ajax and second-placed Chelsea who played out a thrilling 4-4 draw at Stamford Bridge.

RB Leipzig are on the verge of qualifying from the group stage for the first time after a 2-0 victory at Zenit St Petersburg.

Marcel Halstenberg thought he'd given the visitors the lead in the 14th minute with a deflected shot, but the goal was disallowed after a VAR review for handball in the build-up.

The breakthrough eventually came with the last kick of the first half as Diego Demme hammered in a rebound after Marcel Sabitzer's free-kick had hit the wall.

Zenit, who were pushing for an equaliser, were eventually exposed again in the 63rd minute when Emil Forsberg released Sabitze and the Austrian finished calmly past goalkeeper Mikhail Kerzhakov to seal Leipzig's win.

The Bundesliga club's third win of the campaign leaves them top of Group G with nine points and they have the chance to secure qualification for the knockout stages with a win against Benfica on Nov 27.

Elsewhere in Group G, Memphis Depay scored for the fourth straight Champions League game as Lyon beat Benfica 3-1 to take a step closer to qualifying for the round of 16.

The Netherlands forward, who scored twice in the French league on Saturday, volleyed home in the 33rd minute from midfielder Houssem Aouar's excellent run and cross from the left to make it 2-0.

Lyon had drawn their last six games at home in the Champions League, but went ahead when imposing centre-half Joachim Andersen met a cross from Leo Dubois with a thumping header after four minutes.

Benfica grew in confidence in the second half and pulled a goal back through striker Haris Seferovic's low shot in the 76th minute, with a video review ruling out a potential offside.

With the Portuguese side pushing for an equaliser, Lyon substitute Bertrand Traore made sure of the win with an angled finish in the 89th minute.