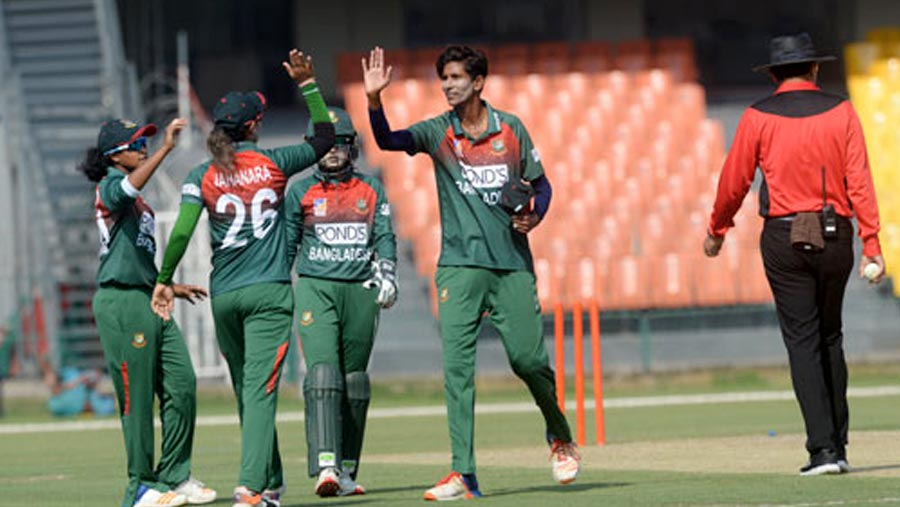 Fargana Hoque's 67 helped Bangladesh women win a thriller in the second ODI against Pakistan on Monday (Nov 4) in Lahore as both teams finished all-square in the two match series. The visitors won by one wicket with one ball to spare, but for a few fleeting moments, it appeared they had thrown away what looked an impregnable position in the game just half an hour before the frantic finish.

Bangladesh women’s cricket team concluded their tour of Pakistan on a winning note as they edged the home side by one wicket in the second and final ODI at Gaddafi Stadium in Lahore Monday (Nov 4).

Chasing 211, the Tigresses reached their destination with one ball to spare and in the process, leveled the two-match ODI series 1-1 after losing the first game by 29 runs at the same venue Saturday.

Middle-order batter Fargana Hoque top-scored for Bangladesh with 67 off 97 balls, featuring half a dozen fours, while others around her chipped in with vital contributions.

Opener Murshida Khatun scored 44 while captain Rumana Ahmed made 31 as the visiting side finally tasted a victory in their Pakistan tour after losing the three-match T20I series 3-0.

Earlier, batting first, Pakistan were all out for 210 in 48.4 overs in the face of some disciplined bowling by the women in red and green.  Rumana put in an all-round show as she picked up three wickets to go with her vital 31-run knock.

Opener Nahida Khan scored the highest 63 for her side while middle-order batter Aliya Riaz and Bismah made 36 and 34 respectively.