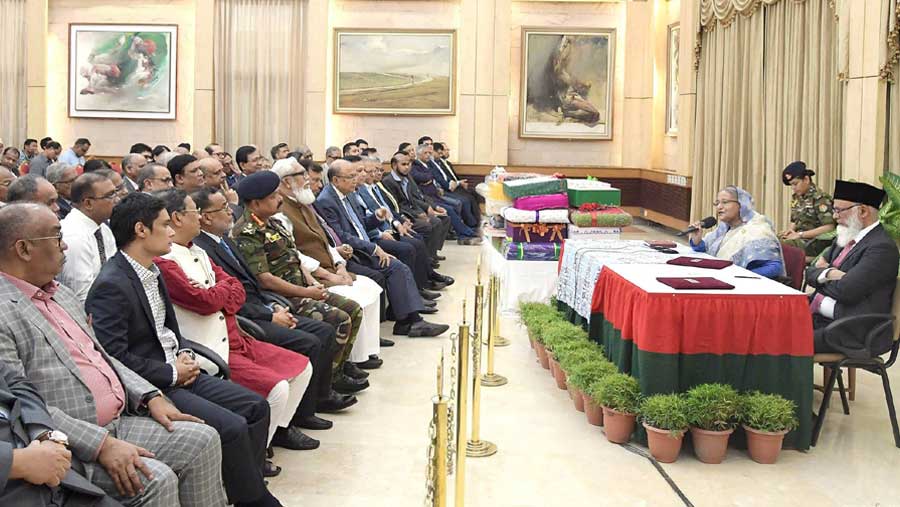 Prime Minister Sheikh Hasina Saturday (Nov 2) said her government has created a scope of using banks by the people and both the state-owned and private banks are getting its benefits.

“We’ve taken steps to build a habit of using banks among the people and they’re using the banks in various purposes like admission (at educational institutions), receiving healthcare and constructing houses,” she said. Sheikh Hasina added: “Both the state-owned and private banks are getting benefits from it.”

The PM made the remarks while receiving blankets from the Bangladesh Association of Banks (BAB) at her official Ganabhaban residence in the evening. Thirty six banks under the BAB donated 27 lakh pieces of blankets to the Prime Minister’s Relief and Welfare Fund through the function, local media reported.

Reiterating that her aim is to ensure welfare of the people, Sheikh Hasina said she does not feel tired when she works for the people.

“When I work for the people, I don’t become tired … if people stay well, that is my great achievement,” she said.

The PM said many things are written about the banks. “But those who have idea about it will not write so much … it’s also right that many (people) write with many intentions,” she said. Sheikh Hasina continued on saying: “I’ll say that there is nothing to be worried about it. As you work much, the expectation of people will be more.”

“There is nothing to be worried and if you run the banks honestly, there will not be any problem,” the premier added.

Sheikh Hasina said her government while giving licences to the private banks has made it mandatory to open their branches at upazila and district headquarters and fulfill corporate social responsibility (CSR). “There was no such system in the past,” she said.

The premier said some quarters had advised to close down the non-profitable branches of the state owned banks. “The World Bank had given such a prescription … but when we came to power we didn’t accept the prescription as economic activities are not equal in all regions,” she said.

“I’ll measure in totality. So why I’ll shut down banks, rather I’ll teach people about using of banks. That’s why we’ve created scope of opening bank account with Tk 10,” she said.

The PM thanked the private banks for extending their helping hands through their CSR programme.

“The government is providing assistance to the distressed humanity. But they’re being more benefitted when you come forward,” she said. In this regard, Sheikh Hasina said economic condition of the people is improving gradually. “They’ll not need any assistance in future Insha Allah,” she said.

Sheikh Hasina said Father of the Nation Bangabandhu Sheikh Mujibur Rahman had liberated Bangladesh with a dream of establishing a developed and prosperous country.

“Bangabandhu couldn’t do it … but I’ve taken the responsibility of materialising his unfinished dream,” she said.

Highlighting the country’s tremendous development that took place in the last one decade, Sheikh Hasina put emphasis on keeping up the development spree.

“The country’s economy is now very strong and internationally, nobody now sees Bangladesh in the eyes of neglect,” she said.

Sheikh Hasina said the government has also adopted Delta Plan 2021 keeping the impact of climate change and cyclones and floods as well as ensuring beautiful life for the future generations in mind.

The BAB chairman informed that the private banks have taken a decision to set up “Mujib Corner” in their respective banks ahead of the birth centenary of Bangabandhu next year.

“The BAB will establish “Bangabandhu Chair” at Rajshahi and Chattogram Universities alongside taking massive programmes to celebrate the birth centenary of the Father of the Nation,” he said.

At the function, the Dutch-Bangla Bank has donated Tk 10 crore to the PM’s Relief and Welfare Fund for purchasing blankets.

Chairmen, managing directors and directors of the 36 private banks were present on the occasion.

Earlier, the PM gave financial assistance of Taka 2.80 crore to the Ansar-VDP members who died while performing duties in the last general elections and upazila polls, as well as some party leaders and workers, valiant freedom fighters and the Aug 21 grenade attack victims.