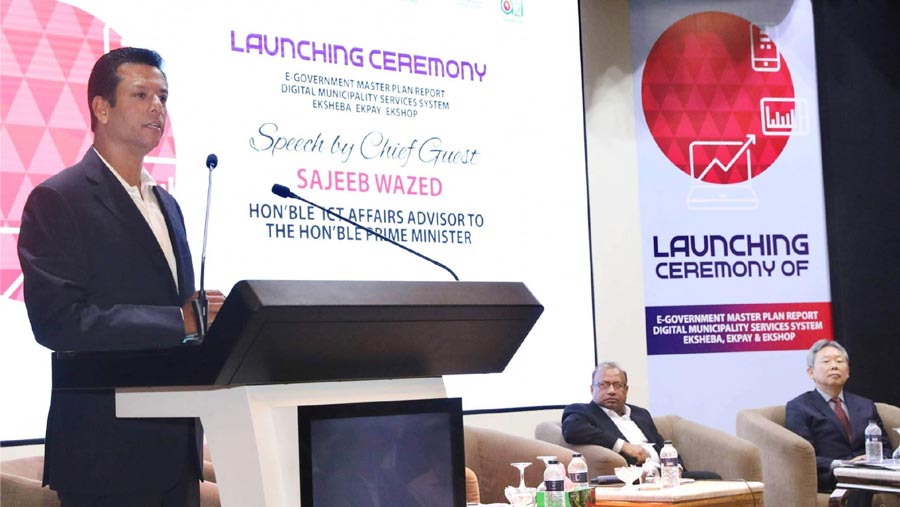 The Access to Information (a2i) programme under ICT Division will implement the services. The Digital Municipality Services System was also launched on the occasion to provide five citizen services in Mymensingh City Corporation and nine municipalities under the pilot programme.

The citizens will be able to pay water bills and holding taxes, get municipality or city corporation certificates, automated property management and e-trade license facilities under the pilot programme.

Cover of e-government master plan report was also unveiled in the function.

Speaking on the occasion , Sajeeb Wazed Joy said: “Our goal is that, by the year 2021, majority of citizen services will be provided either on their fingertips of mobile phones or through our union digital centers at the doorsteps of people.”

He termed the launching of the digital services as ‘buildings blocks’ to implement the Digital Bangladesh.

With the launching of digital municipality services system in nine municipalities and one city corporation as a pilot project, the government has a target to reach the services to 300 municipalities by 2021, he added.

Joy mentioned that Bangladesh has moved to the 115th positions in e-government development index of the United Nations among 193 countries. The country’s position was the 162nd 10 years ago.

The PM’s adviser expressed his optimism that the country would be able to move another 50 positions ahead in the next five years in the e-government index.

He extended thanks to the government of the Republic of Korea and the Korea International Cooperation Agency (KOICA) as they have been a very strong and fundamental partner in the country’s digitization and ensuring digital services to people.

“They (South Korea) have expertise in technology and they have shared those with us to make this rapid progress and rapid digitization in our country,” he said.

Joy said: “Ten years ago, when we started, nothing was digitized in Bangladesh. We were completely a technologically backward country.”

He said today Bangladesh has one of the most advanced national ID systems in the world. “We have fiber optic cable almost throughout the country, almost down to the union level and broadband access has been taken to the union level,” he said.

Joy said the 3-G was launched seven years ago and today 4-G is active in most of the cities in Bangladesh and it has been spreading out beyond the cities.

“Until these fundamental building blocks are built, we could not launch e-government master plan,” he added.

The ‘Ekpay’ is a one-stop payment platform where the people will get facilities to pay utility bills, education related fees and other payments.

The ‘Ekshop’ is the country’s first ‘rural assisted’ e-commerce platform which will enable people to get necessary products in an easier and faster way. Through this platform, people will be able to buy rural products.