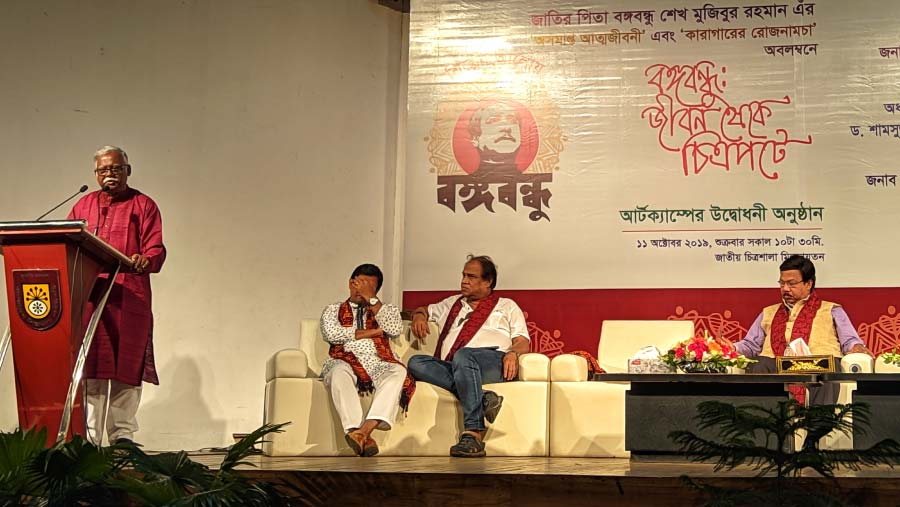 Bangladesh Shilpakala Academy launched a yearlong thematic art camp on the life of Father of the Nation Bangabandhu Sheikh Mujibur Rahman at the National Art Gallery and Art Plaza on Friday (Oct 11).

The art camp is titled ‘Bangabandhu: Jeebon Theke Chitropotey’ (Bangabandhu: From reality to the canvases).

One hundred artists are participating with 100 of their artworks based on two autobiographical books by Bangabandhu – ‘Oshomapto Atmojiboni’ (Unfinished Memoirs) and ‘Karagarer Rojnamcha’ (Diary in Jail).

H T Imam said Bangladesh would not exist as a nation if it was not for Bangabandhu Sheikh Mujibur Rahman.

“Throughout his life, he served Bangladesh as a true patriot. The glimpses of both his journey as a warrior and a common man are presented in his two books,” he added.

Presenting the reviews of the two books, both Dr Harun-or-Rashid and Dr Shamsuzzaman Khan urged the artists to portray the imageries as real as possible according to the narrative of Bangabandhu.