Work together for sustainable development: Hamid 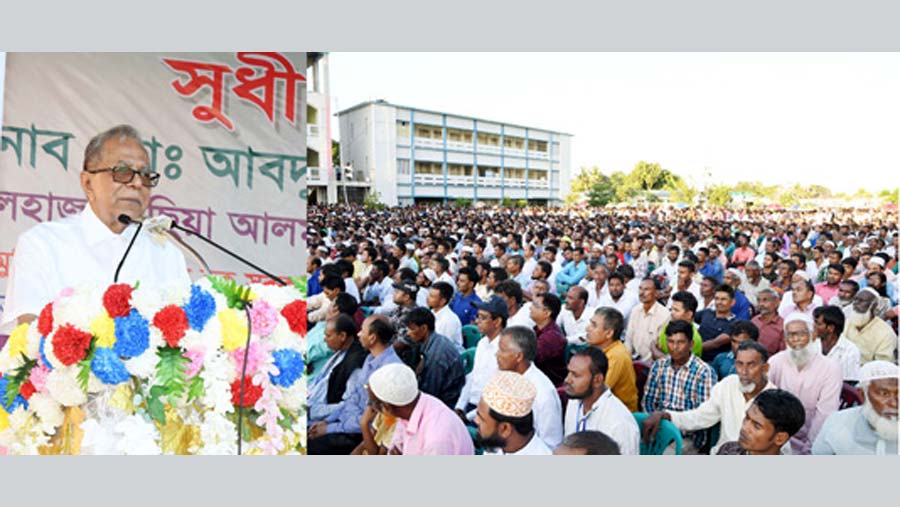 President Md. Abdul Hamid on Friday (Oct 11) asked all, irrespective of party affiliations, to work together to ensure sustainable development.

“You have to work together to ensure sustainable national progress apart from sustaining local development,” he said while addressing a public gathering at Muktijoddha Abdul Haque Government Degree College ground in Kishoreganj in the afternoon, local  media reported.

The head of the state, who is now on weeklong tour at his native district Kishoreganj, said, the country is now witnessing a tremendous development and all people including elected public representatives must take the responsibilities to make the ongoing development sustainable.

Referring to the incumbent government’s extensive development programme, he said as part of it, many programmes have been taken to save the hoar areas for the betterment of haor people. “But it’s very sorry to say that a section of opportunities started building houses next to the under-construction highway connecting to three upazilas of the district. It will be not allowed here,” he said.

Noting that the unplanned construction of infrastructure in the haor areas would hamper the overall haor’s development, the President said this area can be the tourist spots in days to come. He said, “Many people from any visit every day in the haor areas. If we can provide facilities to the tourist, it will make employment for us.”

The President categorically said he would never allow any projects that might hamper the environment of the haor and sought people’s heartfelt support to save the haor in absence of him. President Hamid urged the local elected leaders, MPs, upazila chairmen, chairmen and local elites to behave well with the general people as it doesn’t require any money.

“Don’t be rude to them at all. Maintain the good relation with them who voted you. Try to stand by their side time-to-time during their joys and sorrow,” Abdul Hamid, many times elected MP, advised the local leaders.

Secretaries concerned to the President and senior officials of the local administration were also present there.