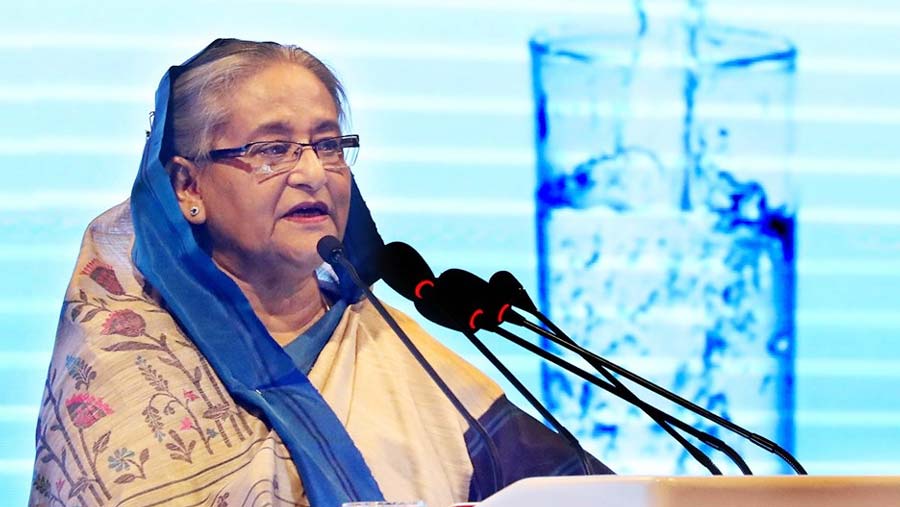 Prime Minister Sheikh Hasina on Thursday (Oct 10) said her government has been working to ensure the supply of safe drinking water to union level from district and upazila.

“Our target is to reach safe drinking water to the union level people from district and upazila level. We have been working to this end,” she said while inaugurating two water treatment plants and laying foundation stone of another at a city hotel.

She added: “We are currently providing safe drinking water to not only in Dhaka but also in the divisional cities.”

Inaugurating and laying foundation stone of the Padma (Jashaldia) Water Treatment Plant (phase-1) and Well Field Construction Project at Tetuljhora-Bhakurta in Savar Upazila (Phase-1) project and Gandhapur Water Treatment Plant at Rupganj in Narayanganj, the premier called upon all to maintain austerity in using of water.

A video presentation was also screened on various projects taken by Dhaka WASA in the last 10 years to meet the growing demand of water in the capital while a brief presentation on the three projects was given at the function, local media reported.

Sheikh Hasina said that holding the slogan of the government, “Safe Water for All”, Dhaka WASA has already ensured legal and safe water connections in the slums of the capital, and set targets to take all the slums under the safe water supply network gradually.

She said, “Programmes are underway for ensuring safe water from surface water sources by 2021 in all the divisional cities.”

In this context, she said, “Steps are underway to build reservoirs in industrial and housing areas, installing rain water harvesting system and draining out wastes and polluted waters.”

She also called upon all to use rain harvesting or available surface water during irrigation of the cultivable lands, saying, “We have constructed 4,700 reservoirs to conserve rain water while dredging is underway of all the important rivers for maintain navigability as well as use those as water reservoirs.”

The premier also said that they desalinated 7,000 ponds by filtering the pond water and 32,600 deep tube wells have been installed in the saline-affected areas.

She said her government has been working to reach every civic amenities to each of the village people due to stop the tendency of going to the cities.

Referring to successful implementation of the Millennium Development Goals (MDGs), the premier said, “Ensure Availability and Sustainable Management of Sanitation for all” is the goal 6 among 17 goals of the SDG-2030 declared by the United Nations. We have integrated the SDGs in the seventh five year plan and are implementing it.”

Coming down heavily on the then BNP government for doing almost nothing to ensure safe drinking water, she said, “When we assumed office in 1996, we found Dhaka city is a city of “water scarcity” and we constructed Sayedabad Water Treatment Plant to put an end to the crisis. After coming to power again in 2009, we found the same situation and we then established Sayedabad Water Treatment Plant 2 and 3.”

The premier said her government has been working relentlessly to build Bangladesh a prosperous and developed one by 2041 in South Asia.