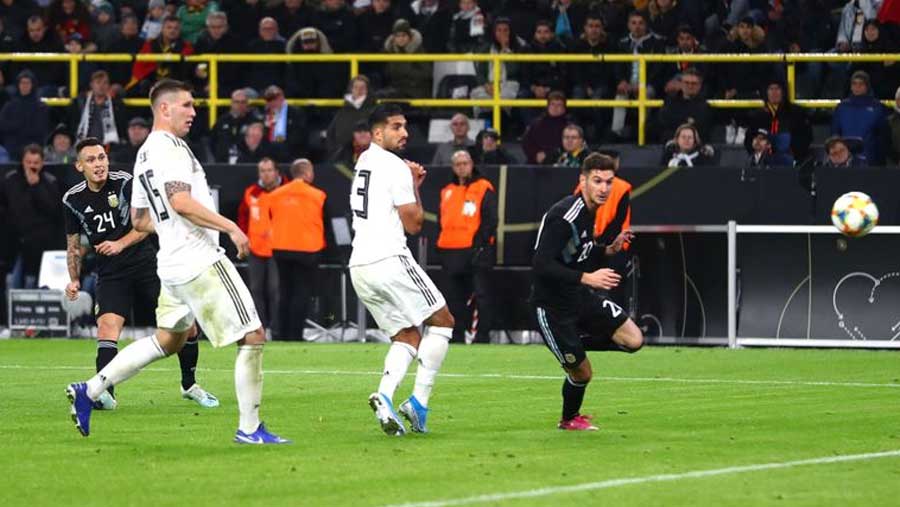 It is always a classic when Germany and Argentina meet. The two countries have played three World Cup finals against each other, with Argentina winning the first in 1986 and Germany the last two in 1990 and 2014. On Wednesday (Oct 9) in Dortmund, both sides, however, were significantly weakened, and although the 2-2 draw was an entertaining game, the match overall lacked significant star power. The biggest name missing from the game was F. C. Barcelona superstar Lionel Messi. The 32-year-old was banned from the South American football federation CONMEBOL for three months and fined $50,000 after he accused the confederation of corruption during this year’s Copa America tournament. Messi, however, was not the only forward absent from Argentina’s squad.

Lucas Alario and Lucas Ocampos both made an impact with goals from the bench as Argentina completed a second-half fightback to earn a 2-2 draw against Germany at Signal Iduna Park.

The hosts took the lead when in-form forward Serge Gnabry beat Agustin Marchesin with a deft finish after 15 minutes.

Highly-rated midfielder Kai Havertz doubled the advantage after an error from defender Marcos Rojo, finishing from Gnabry's cross to give Germany a comfortable lead at the break.

Both sides were denied by the woodwork as Marcel Halstenberg's free-kick crashed against the bar before Rodrigo De Paul saw his long-range drive cannon back off the post.

Rojo was hauled off at half-time after a disappointing first-half display and the visitors looked stronger after the break.

The hosts paid the price for taking their foot off the gas in the second half when Alario, on as a substitute for the disappointing Paulo Dybala, headed home superbly from Marcos Acuna's cross.

The Albiceleste continue to press for an equaliser and got their reward when Alario turned provider, carrying the ball forward before laying off to Ocampos, whose effort deflected off Emre Can and past Marc-Andre ter Stegen in the Germany goal.

By the end, 2014 World Cup winners Germany were perhaps fortunate not to finish on the losing side, with a last-minute panic in their penalty area only eased when Emre Can managed to scramble clear.

It could prove an important lesson in avoiding complacency for Joachim Low's side as they prepare to resume their Euro 2020 qualifying campaign this weekend.

Germany, who are top of Group C and level on 12 points with Northern Ireland, travel to Estonia on Sunday.