BUET can ban student politics if it wants, says PM 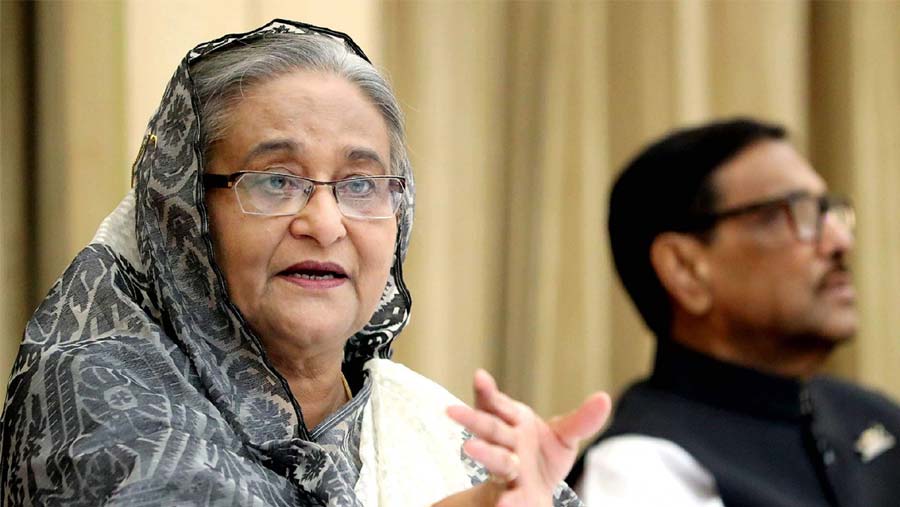 Turning down the possibility of banning student politics across the country, Prime Minister Sheikh Hasina on Wednesday (Oct 9) said that Bangladesh University of Engineering and Technology (BUET) can ban student politics on its campus responding to its students’ demand as political activities are prohibited at many universities.

The PM participated the 74th session of the United Nations General Assembly in New York and visited India.

“Our leadership has originated from student politics. As you (journalists) today say that I pay attention to all affairs of the country, it has become possible for me to do so as I have reached to my present position after doing student politics. So, I am in the know of everything,” Sheikh Hasina added.

Where lies the politics in the Abrar killing, the premier posed the question.

However, the reason behind this killing (Abrar killing) should be found out, she said, adding, “I will ask the law enforcement agencies to search all educational institutions and halls across the country to find out those who resort to muscle flexing and cause such incidents to happen”.

Seeking cooperation from the journalists in this regard, the Prime Minister said the ensuing search will not consider any party affiliation. “But, you should remember that the government is bearing all costs of public university students,” she added.

The PM said she does not consider the identities of criminals and perpetrators.

“To me, criminals are criminals and I consider criminals as criminals. After getting informed about the incident at BUET, I instantly directed the police to collect evidences side by side the CCTV footages,” she added.

Sheikh Hasina said soon after the incident, she asked the BCL top brass to oust the criminals and directed the police to arrest the perpetrators.

“I won’t consider who belong to BCL nor not. Criminals are criminals and they would be brought to justice and get punishment. I don’t wait for anyone to raise demands for justice as before the demands were raised, I gave directives, the criminals are being arrested and it has become easier for police to work after getting the CCTV footage,” she said.

The PM went on saying, “Why there is such brutality as a brilliant boy from a simple family is being killed? We’re taking steps against these criminals and we’ll ensure all sorts of punishment to them and there is no doubt about this.”

Noting that no one knows better than her about the losing of near and dear ones as it took long 38 years to get justice in the Bangabandhu murder case.

She also raised question why police personnel were barred at the BUET for long three hours since they went there for collecting evidences and CCTV footages after the death of Abrar.

Mentioning that killings of Raufun Bosunia and Chunnu also took place on the university campus, Sheikh Hasina said it was Awami League which brought peaceful environment for education on the campuses putting an end to the politics of arms.

The PM also said after such prompt steps from the government following the death of Abrar on BUET campus, there is no need to continue movement by the students as the trial of the perpetrators would be ensured.

Replying to another question on two new provisions as incorporated in the 9th wage board award for journalists and media workers, the PM said Information Minister Dr Hasan Mahmud has been tasked to address the issue.

She said “It is the matter of journalists and their owners. We have done our job. You should ask newspaper owners to take measures in this regard.”

Turning to the Teesta river issue, the PM said talks over the sharing water of Tessta and other seven rivers are continuing. “As NRC in Asam is yet to create any problem, so I informed Naredra Modi about Asam. However, there is nothing to be worried about this”.

Informing that Bangladesh is going to import diesel from India’s Nomalighar in Asam through pipeline to Dinajpur and Parbatipur which will cut the transport cost of oil, the premier said that she has already directed the authorities concerned to build a power plant there which would help the country’s northern region get industrialized.

As a result, she said, arable land will be protected side by side with industrialization, minimizing sufferings of the local people.

Replying to a question, she said, no country can use its ports alone and this is the reality. “We are always saying that they (Nepal, Bhutan and India) can use Mongla and Chattogram ports… we will get revenue,” she added.