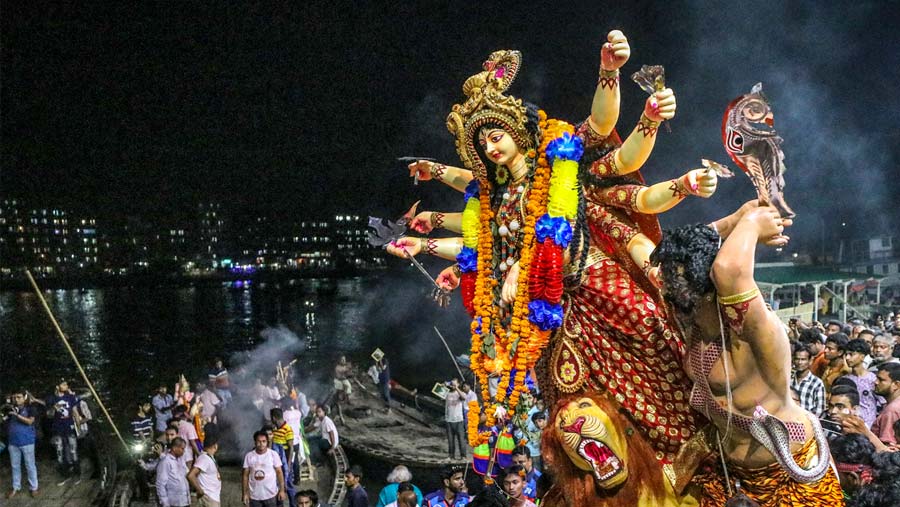 The five-day Durga Puja, the biggest religious festival of the Bangalee Hindu community, ended on Tuesday (Oct 8) with the immersion of idols of the Goddess Durga. Durga Puja, also known as Sharodiyo Durgotshab (autumnal festival), is the worship of Shakti (divine force) embodied in Goddess Durga. It symbolises the battle between good and evil where the dark forces eventually succumb to the divine forces.

At least tens of thousands of Hindus in colourful attires took to the streets beating drums and chanting mantras as five days of revelry and celebration ended on Tuesday (Oct 8) with immersion of Devi Durga in rivers and water bodies across the country.

Durga Puja is the worship of ‘Shakti’, or divine power embodied in Devi Durga symbolizing the battle between good and evil where the evil forces succumb to the divine forces.

The Bijoya Dashami (Tenth day) is celebrated by devotees amid festivity and enthusiasm by visiting relatives and friends and share the joy.

The five-day Durga Puja festival began on Friday with the incarnation (Bodhon) of Goddess Durga on the day of Moha Shashti.

In Dhaka, jubilant devotees joined colourful truck processions carrying idols of Durga amid fanfare towards the Shitalakshya, Turag and Balu rivers for immersion when children, the young and the elderly joined hands to slowly put the idols into the water at the climax of the festival, the biggest of the Bengali-speaking followers of Hindu faith.

The biggest Bijoya procession was brought from the Dhakeshwari Temple in the capital for the immersion of the idol which ended on the bank of Buriganga River near Sadraghat after parading different streets in the afternoon.

Moha Ashtami, also known as Kumari Puja, was observed on Sunday while Moha Nabami Puja on Monday at temples across the country.

Over 31,000 permanent and temporary pandals of Durga Puja were erected across the country this year. Earlier, hundreds of Hindu devotees attired in their best dresses thronged in different puja mandaps in the city since morning to bid farewell to Goddess Durga and seek blessings.

They uttered ‘Shuva Bijoya’ and exchanged greetings with one another. Bijoya is another name of the Goddess Durga better known for her ten hands.

Adequate security measures were ensured this year at all temples and pandals with deployment of additional squads of Ansar, police, RAB and other law enforcement agencies for peaceful celebration of the festival, local media reported.

Yesterday was a public holiday. On the occasion, President Md. Abdul Hamid hosted a reception for the Hindus at the Bangabhaban.

In Chattogram, idols were immersed in the port city’s Patenga and Khalurghat sea beach areas with the presence of a large number of people of the Hindu community of all ages.